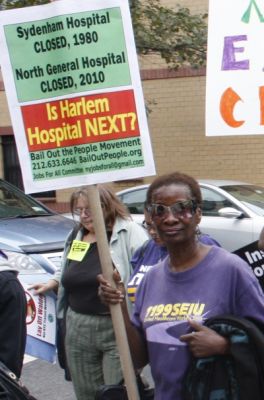 This past July, Harlem workers and residents were hit with yet another blow in the ongoing assault on living standards for working New Yorkers when the 200-bed North General Hospital in Harlem filed for bankruptcy and closed its doors.

The closing left 1,000 employees, most of them Harlem residents — including 900 members of 1199 SEIU United Healthcare Workers East — unemployed. Healthcare services for the community will deteriorate further, as other area hospitals are forced to bear additional burdens — such as 36,000 more emergency room admissions per year — with no additional resources.

First, employees were given only four days’ notice of the closure, even though the board of trustees decided on the move a week earlier and the plan had obviously been in the works for weeks. In the week before the announcement, Daniel assured union members that he was unaware of any plans to close the hospital.

Second, a public relations campaign downplayed the closing and assured Harlem residents that their healthcare needs would be addressed. The New York Beacon, a weekly newspaper in Harlem, trumpeted the bankruptcy deal as having “saved” the hospital. Rangel and Butts assured the community that healthcare in Harlem was only getting better — an assertion belied by the fact that Butts stated under oath to the bankruptcy court that the hospital “has been vital to providing the residents of Harlem with the health services they critically require.”

Bloomberg similarly brushed off concerns about increased emergency loads at other medical facilities, saying, “These things do have a habit of sort of working themselves out.” But workers at other hospitals — which have had to pick up the slack not just from North General, but from other recently closed city hospitals — say the situation in emergency rooms has been chaotic and overwhelming.

Butts also assured North General workers that they would be able to find jobs elsewhere, including the new Institute for Family Health (IFH), a clinic taking over the building. These declarations have proved similarly hollow — IFH has so far employed fewer than 10 of the 900 union members dismissed at North General.

While the National Labor Relations Board (NLRB ) announced on Sept. 17 that it would issue a formal written complaint against IFH for violating numerous federal labor laws, the NLRB’s decision is only a minor victory.

Though the complaint acknowledges 1199 SEIU’s grievance against IFH for bringing in Office and Professional Employees International Union Local 153 to represent workers making lower wages, only 100 jobs will be affected, and the rest of the North General building is being used to move nursing home patients from Roosevelt Island.

Perhaps the most outrageous aspect of all of this is that a New York state authority — the Dormitory Authority of the State of New York (DASNY) — controlled whether North General Hospital would stay open or not, because it holds most of the hospital’s debt.

North General’s bankruptcy papers show a total debt of $293 million and assets of $67 million. The Dormitory Authority of the State of New York’s share of that debt is $190 million. According to Butts’ affidavit in bankruptcy court, North General hadn’t obtained a waiver from DASNY for its breach of certain parts of the loan.

The 286-bed Harlem Hospital is also under increasing pressure. According to reports, Harlem’s neurology and rehabilitation medicine departments are closing soon, the hospital’s 50-year partnership with Columbia University is ending and doctors are being laid off in large numbers.

Indeed, the entire hospital system in New York City is under increasing pressure to reduce its overall deficit to $762 million — which amounts to just over 5 percent of investment bank Goldman Sachs’ net profits in 2009.