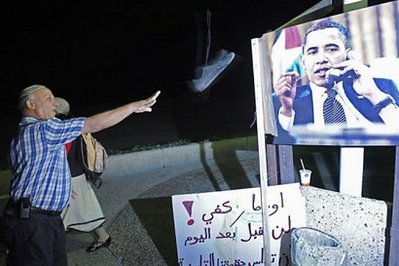 The photo shown above of an Israeli throwing a shoe at an image of Barack Obama perfectly captures the bizarre notion emanating from right-wing Zionist circles, both in the U.S. and in Israel, that President Obama is hostile to the State of Israel.  In the U.S., neoconservative writers and commentators constantly push the meme that Obama is the most anti-Israel president the U.S. has ever seen.

Recently, journalists Edward Klein and Richard Chesnoff authored a five-part article titled “The Jewish Problem with Obama” that perfectly encapsulates the view that Obama is anti-Israel.   The main point of the article, which mostly quotes right-leaning Zionists like Bret Stephens, Ed Koch and Marty Peretz, is that Obama has lost his once overwhelming support with Jewish voters because of his supposedly tough stance on Israel.  The article cites his outreach to the Arab world, the short-lived spat over illegal settlements in East Jerusalem between Vice President Joe Biden and the Israeli government and the Obama administration’s endorsement of the “linkage” argument, which is the notion that the Israel/Palestine conflict contribues to anti-Americanism in the Middle East, bolsters terrorism and harms U.S. national security.

The journalists even go as far to suggest that Obama’s not just anti-Israel, but anti-Semitic:

The White House seemed strangely indifferent to the feelings of resentment that its treatment of Netanyahu aroused in the Jewish community. For shortly after Netanyahu returned to Israel, the president risked provoking even greater Jewish outrage by insinuating that American troops were dying in Iraq and Afghanistan because Israel refused to agree to peace with the Palestinians. The Israeli-Arab conflict “is costing us significantly in terms of both blood and treasures,” the president said.

A perception began to spread throughout the Jewish community that the Obama administration was not only outwardly hostile to Israel, but perhaps, without even knowing it, hostile to Jews as well. This thesis was forcefully argued by Jonathan Kellerman, the best-selling suspense novelist and a professor clinical pediatric and psychology at the University of Southern California’s Keck School of Medicine…

But like the Tea Party fantasy of Obama as a socialist who wants to redistribute wealth to America’s poor, the image of Obama as anti-Israel belies the reality of how Obama has been a staunch ally of Israel while it swallows up more Palestinian land and kills and injures Palestinians daily.

Rhetoric about settlements aside, the Obama administration has continued many of the Bush administration’s staunchly pro-Israel polices, like the adoption of a “West Bank first” approach of showering the Palestinian Authority-controlled West Bank with aid, international backing and training for security forces in an effort to isolate Hamas, which runs Gaza.  This approach is an effort fully backed by Israel, which has had a long-time policy of separating the West Bank from Gaza in an effort to preclude the possibility of a Palestinian state and keep the Palestinians isolated in Bantustan-like arrangements.

What’s more, the Obama administration has, in fact, bolstered U.S.-Israeli cooperation on a number of fronts.  Matt Duss, a national security blogger at Think Progress’ Wonk Room, succintly laid out why the notion that Obama is anti-Israel is just plain wrong in a post yesterday:

…There’s simply no serious argument to be made that President Obama hasn’t been, by any objective measure, an extremely pro-Israel president. He has remained committed to ensuring Israel’s qualitative military edge, raising the amount of U.S. military aid to Israel, making it the single largest expense of the 2010 foreign aid budget. Obama also authorized $205 million to enable Israel to complete its Iron Dome short-range missile defense system.

Obama has significantly increased the level of strategic dialogue and the depth of intelligence coordination between our two countries, particularly in regard to Iran. According an Israeli official I spoke to in June, that coordination is now “even better than under President Bush.”

Obama has expanded trade between Israel and the U.S., and played an extremely important behind-the-scenes role in bringing about Israel’s acceptance into the Organization for Economic Cooperation and Development (OECD).

Obama went before the United Nations General Assembly in September and challenged the international community to support Arab-Israeli peace, insisting before the world that “Israel’s existence must not be a subject for debate,” declaring that “efforts to chip away at Israel’s legitimacy will only be met by the unshakeable opposition of the United States.”

I would add to Duss’ list the administration’s offer of ”military hardware, support for a long-term Israeli presence in the Jordan Valley, help with enforcing a ban on the smuggling of weapons through a Palestinian state, a promise to veto Security Council resolutions critical of Israel during the talks and a pledge to forge a regional security agreement for the Middle East” in exchange for a measly two-month extension of the so-called “settlement freeze.”

Some prominent supporters of Israel in the United States do appreciate Obama’s pro-Israel stance.  Phil Weiss reported earlier this month on a fund-raising letter being sent out by Mark and Nancy Gilbert, who are big-time fundraisers for the Democratic Party.  The letter thanks Obama for his support for Israel and goes on to quote a speech given by Ambassador Michael Oren touting the “brilliant accomplishments and strong support of Israel demonstrated by the Obama Administration.”

Still, Obama’s so-called ”Jewish problem” has become conventional wisdom.  Part of it stems from a distrust of Obama for having a Muslim middle name and for having past relationships with Jeremiah Wright and Rashid Khalidi.  There’s also political incentives for right-wing Zionists to push the “Obama is anti-Israel” meme, as they’re hoping for a Republican sweep of Congress in November and a Republican capture of the White House in 2012.  If that happens, what rhetorical resistance the Obama administration has put up would dissapear under a Republican administration and Israel would have total free-rein.

But even the mild criticism of Israel that Obama and his foreign policy team have engaged in has not contributed to any substantive shift in policy towards Israel.

The gap between the right’s image of Obama and the reality of his policy on Israel is vast, and the Zionist right and the Israel lobby have tailored their misleading image of Obama as anti-Israel to successfully beat back the Obama administration and forced it to tone down what little criticism there was.

The title of this article refers to Norman Finkelstein’s book, Image and Reality of the Israel-Palestine conflict.