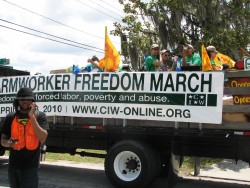 Good news is bursting forth like a healthy crop of winter tomatoes for the Coalition of Immokalee Workers (CIW). Last week the coalition announced one of the country’s largest tomato growers had signed a workers’ rights agreement including the promise to pay a penny more per pound.

These back-to-back victories show that when confronted with social and economic pressure and a nationwide grassroots movement that refuses to back down, even the seemingly worst employers can do an about-face. Both Six L’s and Pacific Tomato Growers, which signed the agreement with the CIW last week, were responsible for cases of modern-day slavery which the coalition had worked with the Department of Justice to expose and prosecute in recent years.

Knowing they’d be hard-pressed to get results from the growers themselves at the start of their campaign a decade ago, the coalition targeted high-profile buyers, starting with Taco Bell and later McDonald’s, Burger King, Whole Foods, Sodexo and others with the idea they would pressure growers to do the right thing.

The fact that growers are in quick succession now signing on with the coalition shows an historic sea change in farm worker-employer relations – even as the coalition and their allies continue to target tomato buyers including the Florida-based supermarket Publix, Kroger, Trader Joe’s and Quiznos.

Paying a penny more per pound could raise farm workers’ income from about $10,000 to $17,000 a year. And perhaps even more importantly, the agreements signify that farm workers are indeed human beings with human rights and dignity whose labor is crucial to feeding the country and making possible the nation’s massive restaurant industry.

As described in a CIW press release, the agreement with Six L’s includes:

A cooperative complaint resolution system, a participatory health and safety program, and a worker-to-worker education process aimed at insuring that farmworkers themselves are active participants in the social responsibility efforts.

The Six L’s company website has long touted its commitment to being “green,” including recycling and chemical reduction but not mentioning labor. A long-standing goal of the CIW’s Campaign for Fair Food is to call out companies that boast of their record on the trendy environmental and animal rights fronts but don’t address human exploitation in their supply chain.

This was a lynchpin of the CIW’s past campaign targeting Chipotle, whose ads tout its “cruelty-free” chicken and beef and its support of family farms, even while the company refused to work with the CIW or address the conditions of migrant farm workers who – more than idealized “family farmers” – are the true modern face of American agriculture.

Each victory continues the coalition’s already illustrious record of not only making concrete improvements in Florida farm workers’ lives, but raising public awareness of the existence and plight of the thousands of largely immigrant farm workers who constitute a “shadow workforce.” They’re normally out of sight and out of mind for the average American sitting down to a meal likely comprised of food grown, processed and transported by easily-exploited immigrant workers.

The landmark agreement is a testament to the perseverance of the coalition, which has spent years battling the near-solid resistance by growers to the group’s reasonable demands. Now farmworkers for Pacific Tomato Growers will be paid more fairly and have a say in working conditions. The move is a courageous step by the tomato grower that should encourage other growers to follow suit.

Given their long-standing atrocious record on workers’ rights and human trafficking; and how long and stubbornly Six L’s and other growers resisted before signing on with the coalition; the Immokalee workers and their allies will likely have to be continually vigilant and pro-active to make sure the letter and spirit of the agreements are upheld. In the wake of both agreements, CIW leaders noted that in many ways these victories are only the beginning.

With this news, we take one giant step closer to a world where farmworkers and growers can work together in genuine partnership for an industry that we can all be proud of — an industry that starts with fair wages and modern working conditions in the fields.

When that new industry becomes a reality, we will be able to stand with our employers and proclaim that, together, we produce the best, and fairest, tomatoes in the market.