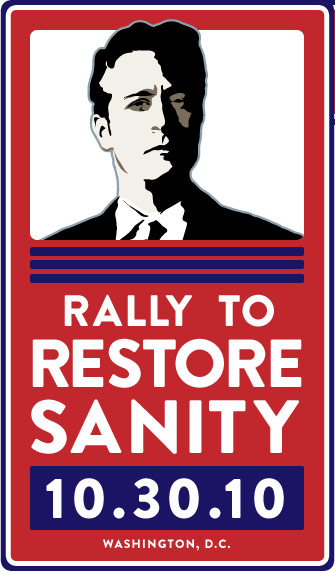 While I regularly watch The Daily Show and think its political satire is second to none, the Rally to Restore Sanity that will be held on the Mall in Washington D.C. tomorrow is problematic on many levels.  Of all the critiques I’ve seen, Daniel Denvir over at Alternet best captured my sentiments:

When he announced the rally, Jon Stewart made a concerted effort to appear politically unaligned, screening clips that imply an equivalence between the wacky right and the wacky left. As Jon Stewart has it, the problem is “loud folks” and a tone of political debate that has become untempered: too many crazies yelling and screaming, comparing people they don’t like to Hitler.

But yelling is not just a matter of loud noise expelled through the human throat. It matters what’s being yelled. When it comes to the Republican Party — and Democratic fellow travelers — they are shouting in favor of corporate exploitation and war.

The Tea Party far right leans on made-up things, also known as lies — “ground zero” Mosque, illegal immigrants purposely causing highway accidents, death panels killing grandma — to win political power. The left has a different problem. We could have used a little more hysteria in recent years, as Wall Street robbed Main Street and the most powerful military on earth invaded multiple countries. Instead, a real anti-war movement never materialized to challenge one of this nation’s most violent presidencies. The people “who have shit to do” that you cited as your fan base, Jon Stewart, should have been out in the streets protesting and putting our 1960s radical parents to shame. But we’ve got “shit to do.” On the Internet, I suppose.

Rather than writing off Code Pink as crazies, which is unfair, Stewart would have been much more constructive if he had acknowledged that they are right to be upset with the ongoing wars that have cost so many lives, but challenged their tactics.

I agree that screaming “war criminal” at government officials isn’t a wise approach strategically and will not likely draw many new people into the peace movement. But that doesn’t mean that we shouldn’t end the wars in Iraq and Afghanistan as soon as possible.

Moreover, I was very disappointed when Stewart made the argument that most Americans are legitimately just too busy to protest. It really reminded me of the folks who think they are clever and original when they tell demonstrators to “get a real job.”

The truth of the matter is that activists are often some of the hardest working people, participating in protests and other forms of political action on top of their day jobs and family obligations, because they believe it important to speak out and challenge power when it is abused. That sentiment and the true dedication of so many activists to building a better world themselves should be held up as a model for what is necessary to have a healthy democracy, not dismissed and insulted as a waste of time.