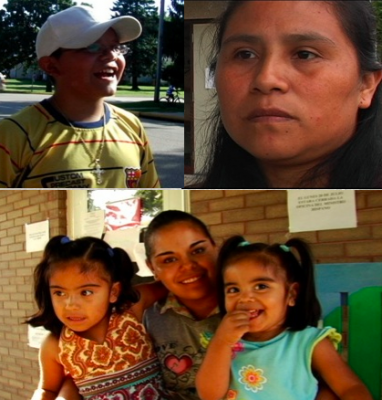 In his new film about the largest immigration raid in US history, acclaimed director Luis Argueta attempts to “create a new narrative about immigrants.” A recent screening of “abUSed: The Postville Raid,” in New York City offered a glimpse of how this can work.

Most of the 389 people arrested on May 12, 2008 at the Agriprocessors meatpacking plant in Postville, Iowa, are from Guatemala, where Argueta was born and raised. This helped him convince children of the undocumented workers to describe the sheer terror they experienced upon hearing their parents had been detained. He tracked down a mother separated from her son, and a worker who lost his house when he was deported and now lives in a shack without electricity or running water.

Argueta contrasts these accounts with those dragged into the raid’s aftermath – a massive operation where workers were tried ten-at-a-time in makeshift courtrooms at a cattle fairground. Erik Camayd-Freixas, a court-appointed interpreter, shares his outrage at how the workers didn’t understand the felony identify theft charges they faced for using false social security numbers. One of the workers in the film observed, “I didn’t steal my card, I bought it!”

By the time US District Judge Mark W. Bennett presided over the cases, the workers had plead guilty in order to avoid the long wait for a trail that would prevent them from supporting their families. All he could do was sentence them to five months in prison as they stood shackled before him. “I was embarrassed to be a district judge that day,” he says in the film.

After the New York Immigration Coalition‘s screening of “abUSed” on Monday at the Symphony Space, guests on a panel moderated by New York Times immigration reporter Julia Preston seemed to pick up on Argueta’s hope that “by looking at the human face of immigration we will be exercising our capacity for compassion and that this, in turn, will give us back our own humanity.”

The clearest example came when the son of Sholom Rubashkin, the former executive officer of Agriprocessors, rose from the audience to make a comment. He argued that “immigration laws are broken and people in this country who want to employ immigrant workers are in a Catch-22.”

But when he tried to use this point to defend his father – who is appealing a lifetime prison sentence for 86 counts of financial fraud – he was largely dismissed by the audience who had just seen workers in the film describe how Rubashkin had employed teenagers as young as 14-years-old to work the overnight shift, stiffed them on overtime pay, and charged them for their own safety equipment while they raced to meet quotas for disassembling slaughtered cows and chickens.

One of the panelists, Patricia Smith, solicitor of the US Department of Labor, responded to the son with perhaps the best line of the night. “Immigration laws are broken, that’s true,” Smith said. “But the labor laws aren’t broken.”

“abUSed” is circulating among international film festivals. Potential television broadcasts are planned for mid-2011, and a DVD release will soon follow. You can learn more about the raid and the film, and watch a trailer at abUSedthepostvilleraid.com.