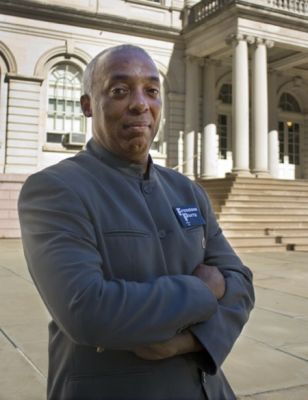 When New York State Democrats gathered at their nominating convention in May, they chose an all-white ticket of statewide candidates headed by a standard-bearer, Andrew Cuomo, who has put forward a program that would balance the state’s $9 billion-plus budget deficit at the expense of working-class people.

The Cuomo coronation continues, but he will be joined on the fall ballot by outspoken Brooklyn City Councilmember Charles Barron after activists with the Freedom Party surprised many political observers by gathering 43,000 ballot signatures this summer, almost three times the legally required amount.

The Indypendent’s John Tarleton recently spoke with Barron about the nascent Black- and Latino-led party and why he is running for governor on its line.

John Tarleton: You have made race a central focus of your campaign. Why?

Charles Barron: Everything — unemployment, inadequate healthcare, miseducation, police terror — comes out of racism and classism, because elites want to maintain control over the wealth. We have to confront race and keep it on the front burner, because when we deal with race and see it as a structural and institutional problem, that’s how we’re going to address the real issues in our communities.

JT: How would you describe the relationship between the Democratic Party and Blacks and Latinos?

The Democrats have taken our votes for granted, the Republicans have ignored us and a lot of the white, left, progressive groups have used us. They may run a candidate here and there but when it comes to our real urban issues they’re not there for us, either. That’s why we have to have this Freedom Party.

JT: And this is why you want a party that’s Black and Latino led?

CB: Led by Blacks and Latinos but open to all, open to everyone to join. The interests of the progressive white community will be our interests as well.
Historically, we’ve joined white-led parties. When we first came out of slavery we joined the party of Lincoln. In 1932, we joined the party of Franklin D. Roosevelt, saying he had a New Deal. There wasn’t any deal for us but we joined him anyway. We’ve also joined white left parties, where white males dominate the leadership. Why not have a Black- and Latino-led party that’s going to be progressive on the issues, fight for structural change and look out for all of the working-class families in the state?

JT: As governor, what would you focus on?

CB: The big issue we have to deal with is the redistribution of wealth and income. Another issue is land control — whoever controls the land also controls development within our communities.

JT: What will the Freedom Party do after Nov. 2?

CB: We’ll have our first convention in 2011 and begin to build our platform, structure our party and look at branching out to other places across the country, including New Jersey, Connecticut, Washington, D.C., Atlanta and Mississippi. So we’re looking to make it a national party and structure it here, locally, in this state.

JT: You joined the Black Panther Party when you were 18 years old and more than 40 years later still refer to yourself as a “Black Panther in spirit.” What did you learn from your experience with the Panthers that has helped you?

CB: It showed me that we can win. Even though the Panther Party is not around, we won in the sense that we raised the consciousness of a generation to the level of revolution. It gave me an ideological and a philosophical base for struggle so you don’t get lost once you get involved in the system — because none of us are going escape some kind of involvement in capitalism.

JT: Are you surprised that the economic crash of 2008 has been followed not by the emergence of a mass movement that questions capitalism, but instead by the Tea Party?