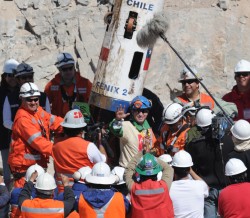 The 33 Chilean miners trapped underground for 69 days have been treated like heroes since their rescue this week. They were invited to the country’s Presidential Palace for a special soccer game. A Greek mining executive offered to pay for them to take an all-expense paid trip to Greek to just relax for a few weeks on Greek beaches. Many other companies have made huge donations to their families.

They are being viewed as heroes, but some disagree with this characterization.

“The miners are not ‘heroes,’ as they have been called around the world for surviving underground for over two months,” Néstor Jorquera, president of the Chilean mineworkers union, CONFEMIN, told the Inter Press Service. “They are victims.” Many in the international labor movement have complained that news accounts have ignored the poor treatment of workers by the mining company, which intially refused to pay their wages after the miners were trapped underground on August 5.

San Esteban, the company that operates the mine, claimed they had no money to pay the workers who were trapped under the mine. In fact, the company was apparently so broke that it couldn’t even pay the costs of the recovery. The government of Chile was forced to pay for a rescue that some say could cost anywhere between $10- $20 million.

As a result, the president of Chile, Sebastian Pinera, vowed to make major changes to the way workers are treated in Chile. “Never again in our country will we permit people to work in conditions so unsafe and inhuman as they worked in the San Jose Mine, and in many other places in our country,” he said.

It’s important to note that working conditions in Chile are notriously unsafe. There were more than 191,000 workplace accidents, including 443 deaths, in a country with only a population of 17 million people in 2009, an astronomical rate for such a small country.

President Pinera set up a commission in August to write a report on workplace safety, which is due to be delivered on November 22. The president also announced the creation of a new mining agency to more strictly enforce mining safety laws and increase funding for safety programs.

But Jorquera, president of CONFEMIN, says this is not enough. He called for Chile to agree to the International Labor Organization’s (ILO) Convention 176 on Safety and Health in Mines, like most industrialized countries around the world have done.

Whether or not Chile signs on to that convention will make clear how serious the country’s leaders are about reforming mine safety laws. It won’t be much of a surprise if the media, which often neglects workplace safety issues, quickly moves on after the rescue and ignores mining safety issues in Chile and elsewhere. But let’s hope Pinera, and the rest of Chile’s leaders in government, act now to ensure we never have to watch another harrowing subterranean story like this unfold.

This article was originally published on Working in These Times, a blog produced by In These Times.