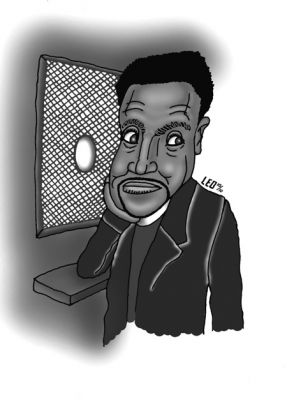 I’m not able to take enough showers to wipe the smell of him off my body” said Jamal Parris of Bishop Eddie Long. In a recent FOX news interview, Parris spoke of sex before and after church services, and in his lawsuit alleged being sodomized orally in Long’s private church office.

Minutes later Long is on the stage of New Birth Missionary Baptist Church in Atlanta, as thousands yell and wave in the 10,000- seat megachurch. They have come to hear the Word of God and the pastor opens his arms as if to lift them to Heaven. From backstage Parris watches, scared but proud because this powerful man proved once again that he is special.

Parris, now 23, was 17 at the time and he, along with three other young men — Maurice Robinson, 20, Anthony Flagg, 21, and Spencer LeGrande, 22 — have filed charges against Long for sexual coercion. Long is the latest to join the roster of hypocrites from evangelist Ted Haggard, who condemned gays but had meth-fueled rounds of sex with a man, to the anti-gay activist and Baptist minister George Rekers, who hired an escort from Rentboy.com.

Repeatedly we see professional moralizers secretly practice the very “sin” they condemn. When they’re exposed, the scandal is reduced to a story of personal failure. But on CNN, a truth was aired when Rev. Carlton Pearson said, “Usually the people who are speaking most vociferously against something are dealing with it in their own life.”

If Long preyed on the young men, it’s because he used religious law as a barricade against his own desires. When he attacked gays for committing “sin,” it’s because they reflected him. Long preached “the reason why society is like it is, is because men are being feminized and women are becoming masculine.” He went on, “I don’t care what scientists say, if you say you were born this way then you’re saying ‘God, you’re a liar.’” In 2004, he organized a march in Atlanta from the tomb of Martin Luther King, Jr., to support a constitutional amendment banning gay marriage.

He wasn’t alone, as behind him are unknown others ranting against gays, claiming to speak a truth guaranteed by God or nature. But there is another truth. Instead of religious law being an ideal to live by and failure a sin, what if it is the law that creates the sin? What if we saw the human being as a rainbow, a full, wide spectrum of sexuality? We’d see that whoever says that one specific orientation, position or need is the only valid one is trying to create fear in order to control.

The 18th-century poet William Blake knew this when he wrote in The Marriage of Heaven and Hell, “Prisons are built with stones of Law, Brothels with bricks of Religion.” Sigmund Freud wrote about our innate bisexuality, and after thousands of interviews, Alfred Kinsey created his seven-point Kinsey scale to map the diversity of sexuality. Sociologist Howard Becker’s labeling theory showed how deviance is not innate to an act, but an act is made deviant by labeling, and philosopher Jacques Derrida’s deconstruction explained how centers are created by repressing a part of one’s being to the margins.

But the repressed always returns. In Totem and Taboo Freud wrote, “The pleasure of the impulse constantly undergoes displacement in order to escape the blocking which it encounters and seeks to acquire surrogates for the forbidden in the form of substitutive objects and actions.” Does this not describe pastor Long’s compulsive mentoring of young men?

Long, like many men in authority, sacrificed his sexual truth for power while using his power to prey on boys. When we stop seeing these scandals as personal failures to live up to a law and critique the law itself, a lot of unneeded suffering will stop. It seems that would take a miracle, but since Long believes in miracles let’s imagine one.

While basking in the stage lights, the boy walks up and kisses him. The stunned church is silent. Long grabs the boy’s arms but instead of thrusting him away, embraces and kisses deeper. In the audience, Bibles burst into flame and as the video feed goes global, men see it and begin to kiss as Korans and Torahs and Bibles flash into flames.

At bars, men grope. At mosques and police stations, men tongue each other. Above their heads on the TV is Long kneeling in front of the unzipped boy. The audience of New Birth Church, half-dressed, is necking in the orange light of burning Bible pages floating down around them.