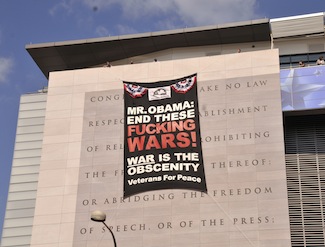 WASHINGTON, D.C.–Today at 1:30 pm, U.S. military veterans hung an enormous banner on the front of the Newseum here, wrapping their message around the First Amendment chiseled in five stories of limestone.

Opposed to the wars and occupations in Iraq, Afghanistan, Pakistan, and Palestine, the vets’ message said loud and clear: “MR. OBAMA: END THESE FUCKING WARS! WAR IS THE OBSCENITY.”

Several veterans dropped the banner down the front of the Newseum, while others distributed copies of a special edition of War Crimes Times, explaining the action and what they considered obscene. Two additional banners, including one that read “How’s the war economy working for you?,” were dropped from the balconies in the interior atrium of the museum.

“The American public should be shocked that we are still killing and crippling thousands of innocent people in these countries as well as our own soldiers–that’s what’s truly obscene,” said Mike Ferner, 59 who served as a navy corpsman during Vietnam. “Blowing people’s arms and legs off, burning, paralyzing them, causing sewage to run through their streets, polluting the water that kills and sickens children, terrorizing and bombing people and their livestock with flying robots–that defines obscenity. If this banner shocks and offends a single person who hasn’t been shocked and offended by what’s being done in our name, we’ve accomplished our misson.”

Video of the action by Washington activist-videographer Eddie Becker
Click here to download a PDF of the War Crimes Times Special Edition.