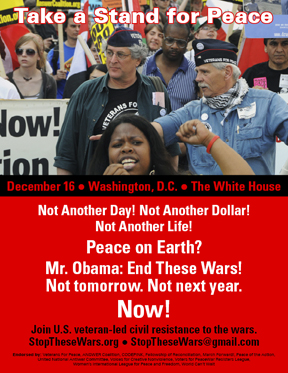 Antiwar veterans, led by Veterans For Peace, will converge on the White House December 16 for what they hope will be the largest veteran-led civil resistance to wars in recent history. Citing World War I veterans who descended on Washington, D.C., to demand their promised bonuses, organizers say, “We are today’s bonus marchers, and we’re coming to claim our bonus–PEACE.”

“Many of us have grown so used to the state of war being a constant these past 10 years that we no longer see it as an emergency, the way we did prior to the Iraq invasion, when millions of us turned out world-wide to attempt to stop the oncoming war,” said VFP member Tarak Kauff, one of the organizers, in  a letter to local VFP chapters. “I want us to again see it as an emergency, a fire that must be put out and one that we will put our bodies on the line to extinguish”

Ken Mayers, also a VFP member and a former Marine, said of his participation, “I have three granddaughters whose futures will be bleak unless we can reverse the American slide into endless war. It’s time to move the resistance up a notch.”