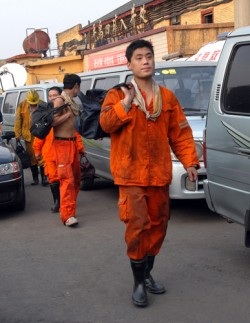 The day after one of the rescued Chilean miners was celebrated on national TV running the New York Marathon, two other Chilean miners were killed and at least five injured in a dynamite explosion at an illegal mine not far from the site of the famous rescue in the Atacama desert.

In Chile and around the world, such “illegal” mines are a deeply ingrained and widely known part of the industry, operating with the tacit approval of governments yet without even the lackluster attention to workers’ rights and safety that apply to “legal” mines.

While the 33 Chilean miners’ ordeal was a story of bravery, ingenuity and drama that rightfully captured the world’s attention, their daily travails and ultimate rescue detracted attention from the factors that got them there in the first place: going underground to seek mineral resources is inherently a dangerous and environmentally destructive proposition, and a lack of regulation and a race for profit make it even worse.

Multiple-fatality mine accidents happen somewhere in the world on a regular basis, and almost never garner the kind of headlines sparked by the Chilean miners. Just days after the Chileans were rescued in October, 37 coal miners were killed in China at the same mine where 23 workers died in a similar incident just two years ago. Also this year, 70 Ugandan gold miners were killed in a roof collapse, and more than 70 Colombian coal miners died in a gas explosion.

Not to mention fatal mine accidents in the United States in recent years, including the death of 29 at a Massey Energy coal mine in Upper Big Branch, West Va. in April, and the infamous Crandall Canyon, Utah and Sago, W.V. disasters of 2007 and 2006.

The Chilean miners’ families are suing the company San Esteban Mining, which had ignored at least 42 notices of safety violations in recent years, and had at least three workers killed in the past six years. The company had not even installed safety ladders mandated by the government. Chilean president Sebastian Pinera launched a commission on worker safety, fired officials in the mining regulatory agency and closed a number of unsafe mines in the days after the San Esteban explosion.

But public, governmental and media scrutiny in the wake of the drama has largely overlooked the systematic problems with mining worldwide. Chile – where an average 34 copper miners die each year—is considered one of the most technologically advanced mining countries.

More rudimentary processes and less safety equipment make conditions even more dangerous in metal and coal mines in China, the Ukraine and other developing countries. Last year more than 2,600 Chinese miners died in accidents. In 2005, the number topped 6,000.

In desperately poor countries, miners feel they have little choice but to risk their lives to make a living. Chilean miners are well-paid, and those at more dangerous and illegal mines are often paid the most to compensate for the risk. And the fatalities and injuries in accidents are only the tip of the iceberg. Mining takes a severe toll on health even when things go as planned, with countless coal and metal miners worldwide dying from black lung disease and silicosis from inhaling coal and rock dust all day.

In Bolivia and other countries, child labor in mines is common. And in some of the poorest countries worldwide, including in Indonesia and various African nations, thousands of people eke out a living doing small-scale independent “artisanal” gold mining, which involves the use of mercury to separate gold from ore. This is an extremely polluting process and exposes the miners, often refining the ore in their own homes, to extremely concentrated and high levels of mercury, a neurotoxin.

In the wake of the Chilean disaster, AFL-CIO president Richard Trumka, a former Pennsylvania coal miner, issued a wake-up call for the protection of workers’ rights and safety across the board. While the Chilean miners escaped intact and became celebrities, Trumka invoked the other miners who have not been so lucky as symbolic of the dispensability of workers in an under-regulated and profit-driven economic system:

My seven years underground taught me more than I can easily say, but one thing that was burned deep into my heart was the preciousness of life, of fresh air, of returning home after a day’s work.

Yet too often, in the blind pursuit of profit, safety becomes a corner to be cut — not just for miners but for every type of worker. Our lives become nothing more sacred than a commodity. In this environment, disasters can’t be simply dismissed as accidental — any more than a drunk-driving death can be chocked up as another little mishap on the road…

So while I cheered for the miners coming up from the ground beneath the Atacama Desert, it was painful to recognize yet another sign of the dangerous, corporate-driven agenda that has far more regard for the bottom line than for working people.