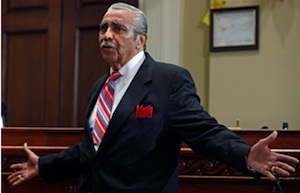 In what turned out to be a quick and dramatic two day trial, Harlem congressman Charlie Rangel was convicted on Tuesday of multiple counts of ethics violations. The committee must now decide on the appropriate punishment for the long term lawmaker in a separate hearing.Over the summer, Rangel was charged with 13 ethics violations. The charges included allegations that that former chair of the Ways and Means Committee had improperly solicited corporate donations for a college educational center bearing his name. The longtime lawmaker remained defiant even as the trial began, and on Monday he abruptly walked out of the hearing after pleading that he needed more time to hire attorneys.

The eight-member ethics panel will now schedule a hearing to determine Rangel’s punishment, which could range from a House vote deploring his conduct, a fine or a denial of privileges.