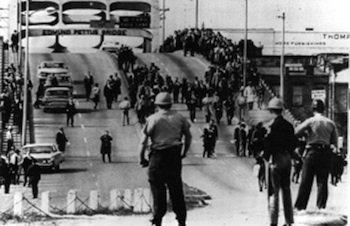 After over four decades, 77-year-old James Bonard Fowler is heading to jail. The former Alabama state trooper plead guilty on Monday in a Perry County, Ala. courthouse to second degree manslaughter charges in the death of Jimmie Lee Jackson in 1965. Jackson’s death became a rallying cry for civil rights activists of the time, and led to the historic marches to Montgomery and Selma.

Fowler faces six months in jail for the shooting, a punishment that some watchers say is considerably too light. The plea deal came before the official start of Fowler’s murder trial on November 29, where he faced murder charges.

Fowler’s case marks the 24th unsolved civil rights-era murder that has been re-prosecuted since 1994. The conviction also marks the first time that someone in law enforcement at the time of the crime has been convicted in these civil rights-era cold cases.

On February 18, 1965, 26-year-old Jackson, his mother, and grandfather joined civil rights marchers in Perry, a small town about 80 miles outside of Montgomery, Alabama. The march began at a local church but quickly became chaotic. Before long, protesters clashed with state troopers inside of Mack’s Cafe. Witnesses say that Jackson was shot when he tried to intervene after troopers billy clubbed his mother and grandfather to the ground. However, Fowler claimed that the shooting was self defense and that he only shot his gun after Jackson reached for it. Jackson was shot three times, including once in the stomach, and died eight days later from his wounds.

In the 1960s, two grand juries investigated the killing, but decided each time against pursing criminal charges. In 2004, Fowler confessed to a reporter for the Anniston Star that had indeed fired the gun at Jackson.

“Jimmie Lee Jackson was not murdered,” he said in the interview, according to the New York Times. “He was trying to kill me, and I have no doubt in my mind that under the emotional situation at the time, that if he would have gotten complete control of my pistol, that he would have killed me or shot me. That’s why my conscience is clear.”

It wasn’t until 2007 that the county’s first black district attorney, Michael Jackson, decided to pursue murder charges against Fowler. The task was made considerably more difficult because of the fact that many of the case’s original witnesses had since died.

In court, Fowler apologized to Jackson’s family. “I was coming over here to save lives, ” he said. “I didn’t mean to take lives. I wish I could re-do it.”

Some have criticized the sentence as being far too light for the crime. The Clarion Ledger noted that Fowler’s six month sentence was the least any defendant had received in of the civil rights cases prosecuted since 1989.

“This man still will have his right to vote. Jimmie Lee Jackson gave his life for the right of blacks and other minorities to vote,” Perry County Commissioner Albert Turner Jr. told BlackAmericaWeb.com. “I don’t know of another civil rights era murder case that resulted in such a light sentence.”

But for Jimmie Lee Jackson’s family, the sentence is hardly enough. The St. Louis American noted that his daughter Cordelia Billingsley spoke in court on Monday.

“This is supposed to be closure, but there will never be closure,” she said.