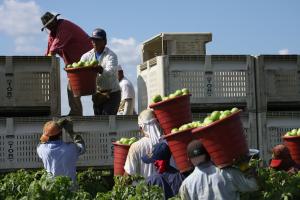 Tomato farm workers have cleared their largest obstacle yet on the road to justice in Florida’s fields.

In a stunning advance, the Coalition of Immokalee Workers arrived at a far-reaching agreement with the Florida Tomato Growers Exchange, the tomato industry group most responsible for blocking farmworker progress. The groups announced the pact at a November 16 press conference in Immokalee, Florida.

Because FTGE represents almost all tomato growers in Florida, CIW estimates the agreement will improve pay and working conditions in 90 percent of Florida’s tomato industry.

FTGE is both an industry lobbying group and a trade organization. Until now it has loudly opposed and even blocked agreements between CIW and its member growers.

DECADES IN THE MAKING

The dominoes have been falling fast for CIW recently, but it has taken decades of struggle to get to this point. Pressure on growers in the 1990s to improve pay and conditions didn’t make much progress, so CIW turned to a corporate campaign strategy, targeting the well-known brands that purchase tomatoes from the growers for whom they work.

They reasoned that tomato buyers—big fast-food chains and food service companies—were exerting strong downward pressure on tomato prices, and thus on the wages paid by their employers.

The CIW’s combination of worker-led organizing in the fields, tireless education and publicity about farmworkers’ conditions among the general public, and coalitions with student and community groups resulted in a series of agreements from food companies to pay an extra penny a pound for tomatoes.

But until the tomato growers got on board, there was no guarantee that extra money paid by these corporations would reach the workers.

An extra penny per pound amounts to a 60 percent raise for farm workers, who are paid around 50 cents per 32-pound bucket of tomatoes. Often they are pushed to overfill buckets with no extra pay.

The breakthrough with growers started last fall when two organic growers, Alderman Farms and Lady Moon Farms, agreed with Whole Foods to implement the CIW agreements and up workers’ pay. Then East Coast Growers and Packers resigned from FTGE, which was still resisting, so it could pass the penny a pound on to its workers.

In recent months two large growers, Six L’s Packing and Pacific Tomato Growers, reached deals directly with CIW. Now FTGE has agreed to a phased-in agreement over the current growing season, to be fully implemented by the 2011-2012 growing season.

“Once there were three major producers and nine corporations, it created enough weight for the FTGE to reconsider,” said farmworker and CIW staffer Gerardo Reyes. FTGE had threatened to fine member growers who passed through the penny. It also insisted the agreements with CIW weren’t legal.

At the press conference, FTGE spokesperson Reggie Brown said his organization had been mistaken about the legality. Brown had previously denounced grower agreements with CIW, calling them a “little un-American.”

In late 2007, FTGE threatened to fine two growers who had been passing on the penny-a-pound increase to their workers. The growers stopped paying. That money has been in escrow, along with other money from restaurant chains. Now that the growers and FTGE are party to the agreements, the workers will get that backlogged money, although the logistics are still to be worked out, Reyes said.

LIVE BY THE CODE

Just as important, the agreement implements CIW’s Fair Food Code, which sets up worker-run know-your-rights sessions to be conducted on company time and provides for employee-controlled health and safety committees. Workers can halt work without discipline if they fear for their safety.

The CIW’s Fair Food Code also defines “zero tolerance” violations for which growers will lose their Fair Food certification, including systematic sexual harassment, wage violations, and racial, nationality, or religious discrimination. And it provides safeguards against wage theft, including reconciling the pounds of tomatoes harvested with the pounds of tomatoes workers are paid for, and worker-operated time clocks to counter minimum-wage and overtime violations.

Facing the CIW’s pressure, the FTGE had tried to set up its own code of conduct. But, CIW pointed out, the growers’ group stripped out all the mechanisms that would allow workers to monitor conditions or report abuses. The code depended completely on management initiative and carried no penalties for violations.

Growers who were supposedly in compliance with the FTGE’s code were found to be using enslaved workers, who were locked in trucks at night and suffered brutal abuse. After some workers escaped by breaking through the air vent in a truck, they and the CIW helped bring criminal charges. The perpetrators, convicted in 2008, joined seven other slavery cases CIW has exposed and helped prosecute in Florida since 1997, which have freed more than 1,000 workers.

For CIW, the victory means a huge expansion in group’s responsibility, for worker’s rights education, for monitoring the code, and for helping organize effective health and safety committees. Implementing the new code will be a two-step process, Reyes explained.

The farmworker group will concentrate this season on the smaller farms that already had direct agreements with CIW, “to get all the experience we can possibly get out of these working groups and then to expand,” said Reyes.

The following season CIW will take those lessons to all the farms in the agreement.

The CIW and community allies are continuing to push grocery stores to pay a penny more per pound. In Florida, the campaign is focusing on Publix Supermarkets, and in other states farmworkers and their allies are pushing Kroger, Trader Joe’s, and Ahold (owner of Stop & Shop and Giant) to sign agreements.