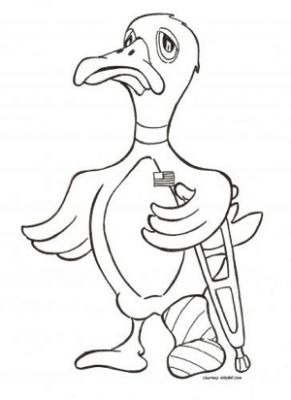 Welcome back to our nation’s capital for your one final session of the 111th Congress. Come January, the Republicans will take over the House while the Democrats will retain control of the Senate.

But Dems — here’s something I don’t understand: Why do you look all sullen and depressed? Clearly you’re not aware of one very important fact: YOU ARE STILL COMPLETELY, TOTALLY, LEGALLY IN CHARGE! When (and if, mostly if) you wake up to the reality that you can do whatever you want for the next seven weeks, you will realize that you have two clear options:

1. You can continue your “Sit Quietly and Hope No One Hits Me” strategy and thus lay the groundwork for an even bigger ass-kicking two years from now;

2. You can actually use the power you hold for the next seven weeks and have the Senate pass the legislation that the House has already passed!

Wake up, Democrats! You are in an awesome position right now. The House of Representatives, in this current session of Congress, has already passed an astounding 420 bills since January of 2009 — 420 bills that are just sitting there on the Senate leader’s desk. The Senate has refused to take up these House bills because they’ve been afraid of a Republican filibuster. Well, Dems, here’s the truth: You can pass all of these bills and turn them into law RIGHT NOW, TODAY, by simply calling for a majority vote of 50 Senators (plus Vice President/President of the Senate Joe Biden). Yes, you will need to change the filibuster rules. So do it. You have the votes! And yes, the Republicans will scream bloody murder — so let them! Make them. Let America see them in all their hateful, spiteful ways — it will act as a beautiful coming attraction trailer for all the world to see. Let all of America watch the Republicans as they try to derail democracy by holding up a bunch of bills that nearly every American I know would want to see as the law of the land. Many of these bills are so safe, so innocuous, I have a hard time understanding what the heck the problem was in the first place. Like the bill that’s already passed the House to name a post office after Jimmy Stewart. I know, I know, the idea of a post office named after Jimmy Stewart is really, really, incredibly controversial and divisive and somebody on the other side of the aisle might yell at you. Be brave, Democrats!

There’s a whole slew of these bills the House has passed. Some are no-brainers; others are absolutely necessary. You can pass them in the next seven weeks. And because you Dems seem to have a problem with properly naming your bills and communicating effectively with the average American, I have helpfully renamed them for you so they sound like what they actually are — things people would really want. Here’s a partial list of the bills the House has already passed and are now just in need of approval by the U.S. Senate:

• The “Give Mom a Raise Act,” officially known as the “Paycheck Fairness Act,” which addresses pay gaps between men and women. Now, who out there still believes women should be paid less than men? I REALLY want to see Republicans try to stop this one.

• The “Don’t Amputate Our Feet Act,” aka the “Eliminating Disparities in Diabetes Prevention Access and Care Act of 2009.” Which Republican will stand to speak out in favor of diabetes?

• The “Pay Up, BP Act,” aka the “Audit the BP Fund Act,” which makes sure BP is paying people hurt by the Gulf oil spill as quickly as possible — and makes BP pay the cost of keeping track of where the money’s going.

• The “Stop Foreigners From Hitting Grandma Act,” aka the “Elder Abuse Victims Act.” This doesn’t really have anything to do with foreigners, but our fellow Americans seem to automatically dislike people from other countries, so this should help just in case the Republicans think an “elders abuse victims act” doesn’t sound patriotic enough.

• The “Let’s Try Not to Destroy Planet Earth Act” (aka Cap and Trade, a lousy half-way measure to begin with, but about the best you can expect from you Democrats these days).

• The “National Bombing Prevention Act” (it’s actually already called that, which is hard to improve on).

And while those of you in the Senate are taking care of all that, the House can come up with a better version of Michelle Obama’s “Healthy, Hunger-Free Kids Act” to improve child nutrition. The Senate has already passed this bill. (The House should fix it so that it isn’t paid for by cutting food stamps to poor people. Yes, you, a Democratic Senate, did that.)

Then there are also things that neither the House or Senate has dealt with. These would take more work during the next two months, but that’s what highly-caffeinated “energy” drinks are for.

Jenni Suri of Ligonier, Indiana, has set up a petition with a good list, which anyone can sign here to tell the Congressional leadership to get started. Among the “to do” items on the list:

• Pass the Employee Free Choice Act, so we can have unions again in the U.S.

• Pass Rep. Donna Edwards’ constitutional amendment that — in the wake of the Citizens United decision — would give Congress the power to regulate corporate spending on elections

So what do you say, Democrats? What’s the worst that could happen — you’d lose an election? You already did that! C’mon, here’s your one last gutsy chance to show us that you’re made of something other than wish and wash.

P.S. Be sure to let the Democrats in Congress know right now you expect action from them during this next month. You can call your Senators and Representative at (202) 224-3121 or find their direct number and email at Congress.org.

Michael Moore is an activist, author, and filmmaker.  See more of his work at his website MichaelMoore.com