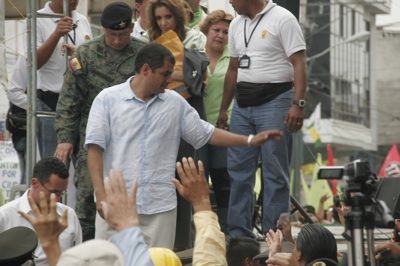 The right-wing coup attempt in Ecuador led by police forces petered out almost as quickly as it began on Sept. 30, but the aftershocks continue to be felt, mainly with the exposure of the rupture between President Rafael Correa and the country’s indigenous movements.

Correa is seen as a member of Latin America’s new left, working to implement modern democratic socialism. When he took office in January 2007, Correa began fulfilling campaign promises such as creating an assembly to rewrite the country’s constitution, using oil wealth for national development and confronting U.S. imperialism. However, once the electoral confetti stopped falling, many indigenous groups say Correa betrayed them by pushing for neoliberal policies, criminalizing protests against his administration and blocking indigenous input in the development of extractive industries and the rewriting of the constitution.

The coup attempt exposed these fractures. While quick to protest the coup, indigenous movements sharply criticized Correa’s policies that have affected them negatively. This rocky relationship demonstrates the challenges of protesting against a leftist leader without empowering the right. Moreover, the political dance between Correa and the indigenous movements offers insight into the crisis in Ecuador.

LITTLE POLICE COUP
The coup began with a police protest against changes in their pay and promotion. While meeting with rebellious police, Correa was attacked and briefly held captive before being rescued by the Ecuadorian military. Thousands of people poured into the streets in protest, hundreds were injured and five died.

Correa’s high approval rating, which stood at 67 percent in Quito, helped hold back the coup. Economist Mark Weisbrot wrote that popular backing for Correa was aided by government policies that have “doubled spending on healthcare, significantly increased other social spending and successfully defaulted on $3.2 billion of foreign debt that was found to be illegitimately contracted.”

Support for Correa from other South American presidents also thwarted the coup, which took place in the shadow of the right-wing coup that ousted President Manuel Zelaya in June 2009. The Union of South American Nations, which includes more conservative presidents in Colombia and Peru, immediately convened a meeting and condemned the Ecuadoran coup attempt, isolating the plotters and marking a clear departure from the era when U.S.-backed coups and dictators dominated the region.

But missing were the country’s indigenous movements. Whereas grassroots support in Venezuela helped defeat the coup against President Hugo Chavez in 2002, and the mobilization from President Evo Morales’ social movement allies helped suppress right-wing destabilization efforts in Bolivia in 2008, Correa was unable to count on the most dynamic social movements in Ecuador during the coup attempt.

A joint statement issued by four leading indigenous groups, including the Confederation of Indigenous Nationalities of Ecuador (CONAIE), denounced the coup attempt while criticizing Correa. “Faced with the criticism and mobilization of communities against transnational mining, oil, and agro-industrial companies, the government, instead of creating a dialogue, responds with violence and repression … The only thing this type of politics provokes is to open spaces to the right and create spaces of destabilization.”

A MOVEMENT FOR SURVIVAL
Founded in 1986, CONAIE advocates for indigenous rights, access to land, autonomy, basic services, environmental protection and political representation. Partly because of the isolation and self-sufficiency of rural areas, CONAIE is made up of decentralized, local communities that meet to debate and make decisions collectively. Direct participation of local chapters helps to hold movement leaders and representatives accountable, and the strengthening of a cohesive indigenous identity has spurred unity within the movement.

In the 2006 elections, the support of CONAIE and other movements helped Correa win the presidency, but he turned his back on the indigenous people and Ecuadorian left almost immediately upon taking office. At the same time, Correa has enacted some progressive policies. He forced the Pentagon out of an airbase in Manta, Ecuador, by demanding a military base in Miami in return. He also appointed a debt commission that led Ecuador to announce it would not pay $9.94 billion in debt accrued illegally by past undemocratic governments, including a dictatorship from 1974 to 1979.

‘PLURI-NATIONAL’ STATE
One of Correa’s more controversial changes was convening a constituent assembly to rewrite the constitution, responding to a decades-old demand from indigenous movements. CONAIE leader Luis Macas said that the indigenous movement desired a “pluri-national” state to reflect the diversity of indigenous land and customs, structurally changing the state itself. Explaining that the Ecuadorian state excludes the indigenous sectors, Macas said, “There hasn’t been any integration of people for almost 180 years of the republic’s life — a vertical state, a state that legislates, a state that, in other words, hasn’t arrived for all these social sectors. We believe that the character of the state must be pluri-national, a state that recognizes each one of the existing nationalities in this country.”

This transformation never happened. Correa looked to political parties, not movements, to participate in the constituent assembly, and social movement representatives were not invited to be part of the commission that generated proposals for the new constitution.

Passed by 64 percent of voters on Sept. 28, 2008, the new constitution expanded state regulation and involvement in the economy and management of natural resources, recognized the rights of nature, and the human right to education and healthcare. But Correa undermined many such changes by forging ahead with oil and mining concessions to generate funds for government programs and initiatives while ignoring the rights of and not consulting with indigenous communities most affected by the extraction.

As part of this strategy Correa silenced opponents, including the environmentalist group Acción Ecológica. Journalist Naomi Klein characterized this act as “something all too familiar: a state seemingly using its power to weaken dissent.”

Pablo Dávalos, economist, professor, and former advisor to CONAIE, noted that Correa uses strategies that “neutralize the ability of the indigenous movement to mobilize and to destroy it as a historic social actor” by pushing CONAIE out of the political debate and calling on police repression to crack down on their dissent.

One of the first signs that Correa would use serious force against leftist protests came with a conflict in the Amazonian town of Dayuma in November 2007. Opposing an oil company’s activity, protesters set up roadblocks to prevent access to oil fields. They called for the government to improve their community’s standard of living and infrastructure, rather than prioritizing the needs of multinational oil companies. Correa responded by declaring a state of emergency. Police violently dragged community members from their homes, arresting 23 people.

Movements find themselves forced either to support Correa as the lesser of two evils, or oppose him and risk fueling the right’s power. As Ivonne Ramos of Acción Ecológica
explained, “There is the question of public sympathy, which is complicated when you have a president with such high approval ratings. Any action that a social movement takes can be read, understood, or publicized as an action in support of the right, since this government is supposedly a leftist one. This has produced a climate of uncertainty over what positions to take, what actions to take.”

BREAKING TIES
On May 12, 2008, CONAIE officially broke ties with the Correa administration in part over the failure of the new constitution to recognize Ecuador as a pluri-national state.

Correa’s government has proposed laws that CONAIE says will lead to the privatization of water, limit community participation in water management, and lessen punishment for water pollution. The launch of the National Mobilization to Defend the Water in September 2009 saw protesters marching throughout the country and setting up road blockades with rocks, logs and burning tires.

CONAIE leaders said they were pushed to this action because they were “exhausted by the process of dialogue.” Protester Ceaser Quilumbaquin said, “We are indigenous people and the majority of water comes from our páramos [plateaus]. Water is life, and the government wants to sell water to private entities.”

In spite of such conflicts, Correa was re-elected president with 52 percent of the vote on April 26, 2009. While his re-election signaled a further defeat for the Ecuadorian political establishment and right wing, it presented new challenges to the indigenous movement.

Decades after CONAIE’s emergence as a national movement, its survival depends on understanding the complex political terrain under Correa, knowing the stakes of its dance with the state, and defending its autonomy, both through pressuring the state and empowering its own territories from below.

Sections of this article are adapted from Benjamin Dangl’s new book, Dancing with Dynamite: Social Movements and States in Latin America. Dangl is the editor of TowardFreedom.com and UpsideDownWorld.org.