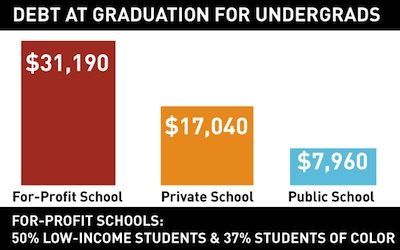 A new report out from the liberal education policy group EducationTrust says that the arc of the for-profit schools industry, and the disproportionate impact its had on the poor and people of color, mirrors another financial debacle that the country should be in no rush to relive: the subprime mortgage crisis.

The growth of the industry has been just as quick, the financial devastation similarly crushing. In the last decade, enrollment at for-profit schools has jumped 236 percent, even though public and not-for-profit private schools saw just 20 percent growth. The growth has come primarily for low-income students and students of color, which the industry proudly claims is a testament to their commitment to the nation’s neediest and most disenfranchised. According to the Ed Trust report, low-income students make up 50 percent of for-profit schools’ consumer base, students of color make up 37 percent; there’s likely a great deal of overlap between the two statistics. For-profit schools make their money off of students’ Pell Grants, the federal money that’s set aside for low-income students, and from everyone else’s federal student loans.

Students enroll in for-profit schools under bloated promises of future employment, often obtaining bogus certificates from unaccredited institutions, or taking credits that aren’t transferable to other schools. Along the way, they rack up tens of thousands in debt, which they often cannot repay.

For-profit school students’ debt, too, is striking. “Among students who earn bachelor’s degrees, the median debt at graduation of students at for-profits is $31,190, compared with $7,960 at public and $17,040 at private nonprofit institutions,” according to the report. For-profit students make up 43 percent of all federal student loan defaults; and fully forty percent of for-profit students default on their loans. One in five default within just three years—double the rates of students at other institutions.

This, against other statistics that some for-profit schools graduate just 22 percent of their students—the national average is 57 percent—has severely hurt the for-profit schools’ public image. Whether it will be enough to convince D.C. to forcefully regulate the industry is yet to be seen.

“The developing showdown between for-profit colleges and the government is another example of how the aspirations of the underserved and the unfulfilled promise of the American dream combine with lax regulation to make the rich, richer and the poor, poorer,” wrote the report’s authors.

And, in a remarkably familiar move, some for-profit schools continue to pursue even those students that they know will likely be unable to repay their loans, and might face default.

The Department of Education has proposed a series of regulations aimed at cutting off for-profit schools’ from accessing students’ federal loan money if they continue to saddle students with too much debt. The proposed regulations have received a great deal of pushback though, and for-profit schools have been lobbying the heck out of powerful D.C. players, including black and Latino congressional leaders, to make sure regulations stay weak.

For-profit schools have defended themselves by saying that the statistics are merely a reflection of their clientele base. Indeed, for-profit schools serve a disproportionate number of low-income students and students of color, many of whom are the first in their families to go to college and who rely on student loans to pay their tuition.

For-profit schools’ recruitment practices continue despite the exorbitant student debt they send students off with, despite the high default rates, and despite the poor job-placement success rates. And still, for-profit schools continue to target even students they know are likely to default. According to Education Trust, some for-profit schools have even begun opening their own loan offices to provide loans directly to students. A little money up front is nothing off the backs of for-profit schools; Apollo Group, which runs the University of Phoenix, posted a 43 percent increase in profits in 2009. (Impending regulation has hurt their stocks in 2010.)

For all the public lashing for-profit schools have received recently, it’s worth noting that the rise of the for-profit schools industry has happened alongside a concurrent disinvestment in the public education system. The country’s poor and people of color are facing imminent crisis on an unprecedented level if the Department of Education doesn’t follow through on its proposals to regulate the industry. But the country also bears responsibility for funneling money away from the community colleges and state schools that used to be reliable institutions of higher education.

These days, with unprecedented budget deficits, education funding is often the first on the chopping block. State budget cuts have made enrolling in community colleges and state schools a gamble; many community college and state school students can’t get into the classes they need, classes that are available are overflowing with students—think students sitting on floors or lined up in the hallway, craning their necks to hear the lecturer—many must delay graduation while they wait for classes to become available.

Students who end up in for-profit schools are very often those who were locked out of not-for-profit schools as a result of the manifold effects of long-term disinvestment in the public education system. Low-income students and students of color often don’t get adequate academic preparation in the primary and secondary levels, the overburdened and underfunded community college and state school system cannot meet the demands of the growing student population, and despite well-documented evidence of fraud, abuse and exploitation, the government has still yet to forcefully regulate the for-profit industry.

And that’s where we are today. Waiting on federal regulation, or fallout of subprime mortage crisis proportions.