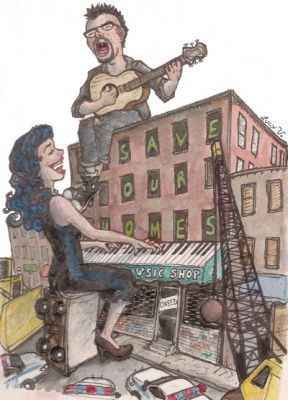 There isn’t much overtly right-wing music. Ted Nugent is known as a farright rock star for his “God, guts, and guns” spiel, but his favorite lyric subject is sex. Sure, there’s the occasional jingoistic country hit by Toby Keith or Lee Greenwood, and a small subculture of “white power” skinhead rock, but overall the vast majority of popular music ranges from apolitical to leftist.

Conservapedia, the website whose creators believe Wikipedia has a “liberal bias” because it doesn’t treat “young-earth creationism” as legitimate science, is trying to remedy that. It has a growing list of the 68 “greatest conservative songs,” based on criteria like patriotism, religiosity, Southern pride and appropriate sexual values.

The list is heavy on country (“virtually anything by Toby Keith”) and ’70s Southern rock and prog-rock. However, some of its selections are quite a stretch. Yes, ’70s hits like Orleans’ “Still the One” and Harry Chapin’s “Cat’s in the Cradle” were respectively “a tribute to fidelity in relationships” and expressed the importance of “responsible fatherhood,” but Orleans’ lead singer John Hall became a liberal congressmember, and Chapin regularly played benefits for Michael Moore’s first newspaper. “Love Me, I’m a Liberal,” by ’60s protest singer Phil Ochs, is about “revealing liberal hypocrisy”— the hypocrisy of liberals who denounce the left instead of living up to their principles. And the Flying Burrito Brothers’ “Sin City,” an early country-rock tune, “attacks modern decadence and predicts divine punishment for sin”— but it warns the rich that their gold-plated doors won’t protect them, mourns the murder of Robert F. Kennedy, and was written by Gram Parsons, who did so much dope that Keith Richards worried about his health. (Parsons, a seminal figure in country-rock, died of a morphine overdose in 1973.)

Conservapedia could find more explicitly right-wing music by digging deeper into American history. In the 1920s, the Indianapolis-based KKK label put out records like “Why I Am a Klansman.” (Phonograph inventor Thomas Edison called it a “fair tune,” but refused to distribute such “trash” on his label.) The ’60s saw the obscure genre of segregationist country, with acts named Johnny Rebel, James Crow and Odis Cochran and the Three Bigots. (Their song titles fixated on one six-letter word.)

RebelMart is the one-man band of Scott M.X. Turner, who previously played in the Spunk Lads — “a long-lost English ’77 punk band” — and the Devil’s Advocates. (Disclaimer: I’ve played with Turner in two bands.) He’s a fiercely political songwriter who frenetically flays a frayed-paint Telecaster [electric] guitar. An Irish-American Joe Strummer might be a good place to start your imagination.

Turner was active in the campaign to stop developer Bruce Ratner from demolishing several blocks of Brooklyn (including his favorite venue, Freddy’s Bar) for a taxpayer-supported real-estate scheme. Disgusted after that campaign lost, he decamped for Seattle. As a result, Amalgamated Saboteurs Local 21 has a lot of songs about defeat, laments for a doomed Brooklyn. “Ruby’s Bar still wears the crown, but Thor’s hammer is a-comin’ down,” he rages on the opening track. The music leaps eclectically but cohesively, from ’77-punk blast to driving acoustica to dubwise groove to Celt-flavored balladry. “The Devil Down in the Water,” Turner’s Hurricane Katrina song, gets transformed into a dirge with a tolling bodhrán drum.

The album encompasses Americana from the 7 train to the Dust Bowl, contrasting Seattle’s “first ever Hooverville” with its latteand- computers image, and mourning the lonely, alcoholic death of Stephen Foster, “like a 19th-century rock star,” Turner said at a recent show in Brooklyn. It closes with a harmonica moaning like a dying prairie campfire.

Martini Eyes is Lorraine Leckie’s solo project; she usually plays with a full band (Lorraine Leckie and Her Demons), in territory somewhere between Patti Smith and Neil Young. It’s a stark, minimal album, usually just voice and acoustic guitar or piano, with discreet touches of bass and harmonica. (Disclaimer: She’s also a friend of mine; we met a few years ago, at the protest against the eviction of Tonic.)

Leckie says she wrote the first track, “Don’t Giggle at the Corpse,” after going to too many funerals for friends. Told in a childlike deadpan singsong, it’s ostensibly addressed to a kid, but could just as well be aimed at your/her inner imp.

The songs’ styles vary from the revenge waltz of “Mississippi” to the theatrical “I Met a Man” — a drug-smuggling tale paced by nervous, repetitive piano — but the album sustains its simple, late-night kitchentable feel. In a time when we’re incessantly bombarded by media, ads, video and electronic beep-alerts, such quietness is revolutionary— it forces us to shut out the noise and pay attention to other humans. Both these albums are shining examples of how musicians may lose celebrity-market potential as they reach middle age, but they’ve got a lot more craft and emotional depth to show.

Meanwhile, if you want some proudly Southern music that’s unlikely to make Conservapedia’s list, check out Blues Mix Vol. 1: Super Soul Blues (Ecko). I’m particularly enjoying O.B. Buchana’s “We Don’t Get Along Until We Gettin’ It On,” David Brinston’s slow-burning “Back on the Backstreets,” and Luther Lackey’s advice grooves, “Man Up to It” and “If She’s Cheatin’ on Me, I Don’t Wanna Know.”