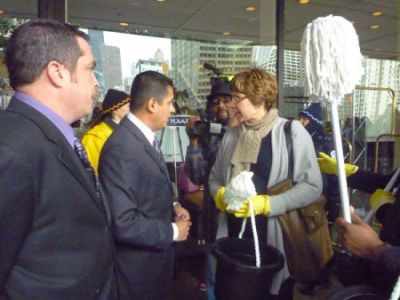 The Hyatt Corporation just posted quarterly profits that jumped six hundred percent with their stock prices climbing at around the same rate. Along with this jumping and climbing, the corporation has taken up running, as in running away from the worst safety record in the industry.

Hyatt ranks last in workplace injuries suffered by its housekeeping staff according to UNITE-HERE, the union representing over 100,000 workers in more than 900 hotels in North America. The union is not alone. It cites a peer-reviewed academic study published by the American Journal of Industrial Medicine that places Hyatt dead last among the 50 hotels studied.

The abysmal record prompted Hyatt housekeepers at twelve hotels in eight different cities to simultaneously file injury complaints a few weeks ago with the Occupational Safety & Health Administration (OSHA). The union cites public records submitted by the hotels that indicate a 50 percent higher injury rate than the rest of industry.

For example, OSHA logs recorded 750 injuries at these 12 Hyatt properties between 2007-2009. Here’s why, according to the union: “At some Hyatt hotels, room attendants clean as many as 30 rooms a day, nearly double what is commonly required in the industry. This workload leaves room attendants as little as 15 minutes to clean a room—that’s 15 minutes to make beds, scrub and clean the toilet bowl, bathtub and all bathroom surfaces, dust, vacuum, empty the trash, change linens—among other things.”

Thus, it is with some pride that the union describes the synchronized filing of OSHA complaints as a first in the private sector. It certainly will put a bigger spotlight on safety issues which are often ignored or pushed aside until a big catastrophe occurs.

But most work injuries do not occur through the better-publicized dramatic emergencies that periodically occur. In fact, most injuries at work occur through the dull, boring and routine repetitive motion performed each day of each week and of each month.

All this work is made worse when you are required to do it quickly.

The OSHA complaint suggested remedies recommended by leading health and safety experts and based on the latest ergonomic studies. According to the union, these recommendations included: fitted sheets to reduce the number of times that women must lift 100-plus pound mattresses to tuck sheets; long-handled mops and dusters, so workers do not have to get down on their hands and knees to clean the floors or climb bathtubs to reach high surfaces; and reasonable room quotas, so women no longer have to rush to finish rooms, risking slips and falls.

None of the procedures are very expensive or complicated.

“It is critical that we explore ways of making hotel work safe to reduce the high rates of injury that we see among housekeepers,” says occupational health expert Gary Orr. “Corporate-wide solutions are not only needed but are the most effective and less costly as they can be applied to multiple worksites.”

The simultaneous filing of OSHA complaints is another example of the union expanding cooperation and communication among hotel workers throughout North America.

Coordination of strikes and boycotts is also expanding across the nation as more contracts expire and as owners become more intransigent. Last month, the union shut down Hilton hotels in Honolulu, San Francisco and Chicago because management continued to obstruct negotiations, some which have been stalled for 15 months

“These guys are multi-national corporations, to have any sort of impact, we have to have actions across the country,” said Riddhi Mehta, press spokeswoman for San Francisco’s Local 2.

But so far, Hyatt hasn’t budged.

He claimed that “Hyatt cares deeply about the health and safety of its associates. We are proud of our work environment, which we constantly strive to improve through training, worker feedback, employee recognition programs, room design, and other initiatives.”

This is exactly the reaction, almost word for word, received by a community, labor and religious delegation on Thursday, November 18, when speaking about safety issues with San Francisco Grand Hyatt General Manager David Nadelman. Several members of the delegation were professionally-trained health and safety experts with extensive experience.

Nadelman was provided proven remedies for Hyatt’s outdated and unsafe practices such as the easy solution earlier cited of using fitted sheets.

But Mr. Nadelman was not moved. At least he did not move off his scripted reaction which was a repeat of Mr. Webb’s statement last week. After the meeting, I pressed him to say more and to “drop the canned response that came out of Chicago.”

“It was not canned,” he said, “I know our record at this hotel and I am very proud of it. And now I think I have taken up enough time for this meeting.”

Clearly Mr. Nadelman was quite uncomfortable. Maybe it was the strain of appearing so nice and pleasant to a delegation that included prominent religious figures and the District representative of Fiona Ma, California State Assembly Speaker Pro-Tempore. Or, maybe it was my asking him to go off script for a moment.

In any case, after a little research, I discovered that the San Francisco Grand Hyatt housekeepers account for 57% of all reported injuries at the hotel. Clearly, Mr. Nadelman’s boastful pride of his hotel’s record is no more warranted than the dismissive arrogance of Chicago corporate spokesman Mr. Webb

Both Hyatt executives should be mindful of an old safety tip: If you step back too much to admire yourself, you might hit your head on the wall.

This article originally appeared on Working In These Times.