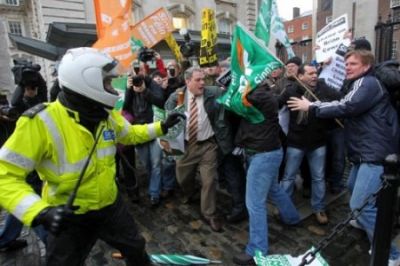 The Irish people’s resilience is the stuff of legend–generation after generation of migration, working-class struggle and perseverance in the face of dire poverty. But now that a desperate government is resorting to financial cannibalism, the Irish seem to have hardly any fight left in them.

The deflated real estate bubble and resulting austerity budget has resurrected old memories of economic miseries. But since this crisis is directly tied to the IMF and European Union’s politics, Ireland’s “new” poverty reflects a global betrayal: a brief revitalization squandered by the frenzied speculation of a tiny elite.

Irish Labor is making one last stand today with a massive protest against an approaching wave of budget cutbacks. This effort to “correct” the damage of the market will almost surely result in devastation of the public sector workforce, prolonged economic stagnation, regressive tax increases, and the starvation of welfare programs, including the minimum wage. As Paul Krugman points out, this is not so much a “confidence building” plan, as politicians have advertised–more like a suicide pact.

The Irish Congress of Trade Unions has taken a lead role coordinating the march, warning that the emerging four-year plan would “turn this country into a social and economic wasteland.”

Ireland has been held up in the EU as an example of the next domino to fall after Greece in the cascading collapse of Europe’s financial scaffold. So EU negotiators have swooped in, leaving Ireland’s citizens largely feeling alienated and bitter about the “cure” to be foisted upon them.

ICTU President Jack O’Connor said in a statement, “[people] must not stand idly by while the script for tomorrow is fashioned by a Government that has lost its mandate, and inscribed in an unalterable agreement with the money lenders of the world, while the people are completely disenfranchised.”

Many fear that the country’s pending bailout will amount to another EU-IMF kiss of death. The conditions tied to the e.85 billion package are expected to layer yet more debt and pain on the indignity suffered by the growing poor population. Formerly a model of breakneck development, the Wall Street Journal reports, Irish society today is in many ways just breaking apart as unmet social needs mount.

Harry Browne of the School of Media at Dublin Institute of Technology reflects on the Irish meltdown as a convergence of structural failures: reckless risk-taking by the country’s chief financial institutions, the inevitable dangers of interconnected risk and calculated predation in the global economic structure; and a weak political leadership that has cowed under the EU’s pressure. Calling for an international movement, led by hard-hit EU nations, to resist crushing austerity measures, Browne concludes in Counterpunch:

It is a measure of the country’s confusion and self-abasing self-absorption that even a week ago many people were likely to welcome the IMF as more competent than any Irish institution to resolve this crisis. IMF spokespeople are highly plausible, and its supporters are on standby to assure us that the fund is not nearly so extortionate to countries that come to it for help as it used to be.

By Monday we will know much more about the levels of resistance and quiescence, as well the levels of poverty and peonage, that will determine the future direction of this crisis.

The Irish polity has come a long way since the Easter Rising and Bloody Sunday. But when the next working week begins, the world will watch as past struggles for autonomy color Ireland’s struggle for a new kind of sovereignty.