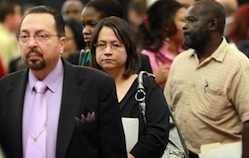 Millions of unemployed folks may receive the last installment of their jobless benefits this week if Congress fails to extend the unemployment insurance program before Tuesday.

Unemployment insurance usually lasts for 26 weeks, but during periods of high joblessness, Congress has historically extended the program by passing emergency spending measures. It’s done so four times since 2008. Over 40 percent of the close to 15 million unemployed people in the U.S. have been out of work for longer than 26 weeks.

The current extension expires tomorrow, on Nov. 30, and if Congress refuses to fund a fifth extension it will force states to start cutting a million people from the program each month. With Republicans set to take control of the House in January and vowing to cut spending at all costs, this may the last chance Congress has to extend unemployment insurance.

The unemployment program kept a record 3.3 million people from falling below the poverty line last year. Even with the extensions, 1.6 million spent at least part of the year in a homeless shelter last year.

Earlier in this month, House Republicans blocked a three-month extension to benefits. But that was just the latest jolt in an ongoing tug of war over jobless benefits. For the past year, they have been a recurring cause of rancorous partisan struggle, as Republicans and Democrats have each tried to make the program a political symbol of their ideas for government’s role in the economy.

Conservatives say extending the program adds too much to the deficit and argue that if it’s extended it should be paid or with unspent stimulus dollars. Democrats respond to this by pointing out that jobless benefits act as an economic stimulator because unemployed folks turn around and immediately spend the money they receive. And, they add, unemployment insurance has always been treated as an emergency spending issue in times of high unemployment. The back and forth has not served out-of-work Americans well. In June, Congress let unemployment insurance lapse for over a month and millions temporarily lost benefits.

But conservatives’ opposition to spending on jobless benefits has been about more than concern over the deficit. Another, darker ideology has also arisen alongside the rhetoric of fiscal responsibility: the entirely unsubstantiated assertion that jobless benefits make unemployed people lazy and keep them jobless. Given the huge racial disparities in joblessness, that’s a troublingly loaded canard.

Speaking to The Hill, Matt Mitchell, a research fellow at the conservative Mercatus Center at George Mason University said, “The irony is that by refusing to extend unemployment benefits, Congress may have taken its most effective step toward reducing the unemployment rate.” Conservative congress members have previously said the same.

The claim is absurd. First of all, unemployment benefits offer a franction of the income that a job would provide. But more significantly, Labor Department data reveals that the overwhelming reason that people are unemployed is that there just are not enough jobs. There are five jobless people for every one job opening.

But the counterfactual argument that federal efforts to fight poverty are responsible for poverty is as old as Reconstruction. Not surprising, then, that it reemerges at a time when unemployment is most likely to strike black and brown workers. Black joblessness was 15.7 percent last month, almost twice the unemployment rate among whites. Latino unemployment was 12.6 percent. And people of color are more likely to be out of work for longer. This is true not only for blacks, American Indians and Latinos, but also for Asian workers, who are more likely to face barriers to finding a new job after losing one than whites.

The impacts of unemployment are far-reaching. As Yvonne Liu wrote last week, long term unemployment “has deep implications for the lifelong health and well-being of an individual as well as their children and families.” And Naima Ramos-Chapman explained skyrocketing unemployment among young people of color is on course to expand an already vast racial wealth gap.

Short of a massive investment in a targeted public jobs program, unemployment insurance may be the only tool available for slowing the downward slide Liu and Ramos-Chapman describe. At minimum, the program helps keep families housed, fed and paying the bills. But it can also provides jobless folks with support while they get retrained or enroll in school so that they might reenter the job market more competitively.

Congress has until tomorrow to extend the benefit. If it fails to do so, cuts will begin on Friday. Meanwhile, it remains unclear if Congress will extend President George W. Bush’s tax cuts for the richest Americans. The tax cuts have increased the federal deficit by billions, but deficit hawks aren’t concerned with that. They’re worried about the cost unemployment insurance. Priorities anyone?