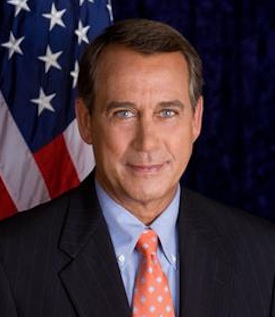 “The peoples’ priorities will be our priorities, and the peoples’ agenda will be our agenda,” declared John Boehner, Republican Representative from Ohio’s 8th congressional district and likely the next speaker of the House, on an election night that saw the Republican Party retake control of the House of Representatives.  Despite Mr. Boehner’s populist-style comments one may get a more representative idea of how he intends to govern by considering his previous actions as a congressman.

One of Boehner’s earliest and most notorious actions as a member of congress came on behalf of tobacco companies who have been major contributors to his political career. As revealed by a 1996 PBS documentary, Boehner was caught handing out checks from tobacco industry lobbyists to members of congress on the floor of the House in order to sway their vote in favor of a subsidy for tobacco companies; a subsidy they ultimately received.

Boehner claims to be a defender of the average American. This may seem misleading when one considers that according to a 2006 report by Forbes he had made the lives of those with student loans considerably more difficult in favor of moneyed interests.

“…Boehner’s committee adopted rules to raise student loan limits and set a fixed 6.8% loan rate after years of it being a variable rate pegged to the 90-day T-bill. Critics complained the new rules were a sweetheart deal for the loan companies at the expense of students.”

Boehner is also an unabashed, unconditional supporter of big business interests as evidenced by his “I am the business community” remarks in an interview with CNN. According to the Center for Public Integrity, a Washington based investigative journalism group, “He has backed the U.S. Chamber of Commerce’s position 93 percent of the time through his Congressional career.”

The former House Education and the Workforce Committee Chairman from 2001 to 2006, Boehner has worked similarly to limit the efforts of those in the labor community. The Center for Public Integrity also reported that according to the AFL-CIO, “he voted against their interests on every vote he cast in 2008 and 2009, and, as of 2008, backed the labor coalition just 5 percent of the time over his career.”

And if all of this wasn’t enough, Boehner is a supporter of extending the Bush tax cuts that shift the tax burden away from the wealthy and are partially responsible for the increasing economic inequality in the United States.

In an election that has been widely described as a repudiation of the Democrats, presumably because they were unable to accomplish enough for the average American, many voters may have to wait at least another two years to see any real change as a result of the leadership of John Boehner. The contrast between his rhetoric and his record, is an increasingly common theme in Washington and is emblematic of the disconnect between voters’ expectations and how they are actually represented.