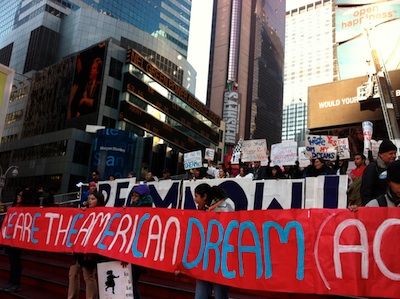 Tourists in Times Square looked on this afternoon as hundreds of students climbed the red bleachers where people usually wait to buy Broadway tickets, and held up 6-foot-high letters that spelled out “DREAM NOW.”

Then they unfurled a banner stretching across the bleachers that read, “We are the American DREAM (Act).”

Then they started chanting, “education not deportation!”

“We are the future of America,” said an 18-year-old undocumented student named Manisa. “You cannot ignore the noise we’re making.”

The rally was an attempt to pressure 11 key New York congressmembers to support the DREAM Act during the “lame duck” session before Republicans regain control of the House next year and it is unlikely to pass.

“Leaders in Congress, including Obama, the Congressional Hispanic Caucus and Senator Harry Reid have said they want to put the DREAM Act up for a vote, and this week is it,” said Jennifer, a member of the New York State Youth Leadership Conference (NYSYLC).

As early as Tuesday, Sen. Reid is expected to introduce a scaled down version of the DREAM Act that would allow young immigrants to adjust their status if they can prove they’ve been in the US and completed 2 years of college or military service.

Thousands of supporters around the country are also working the phones in final push for an idea that has enjoyed bi-partisan support in the past 10 years it has been introduced in Congress.

Among those helping with phone calls is a Vietnam veteran and Peruvian immigrant, Daniel Angeles.

“They don’t want to do anything wrong, they’re good kids,” said Angeles, who traveled from Queens to show his support at the rally after making several calls to state representatives.

Renée Feltz co-produces deportationnation.org. Her cover article in the Nov. 17 issue of The Indypendent looks at a new federal program that could greatly expand immigrant deportations in New York City.