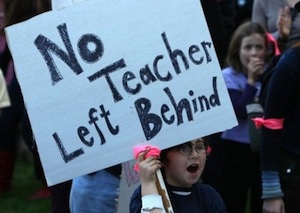 The New York City school system may be short on textbooks and qualified teachers, but it does feature a big, shiny revolving door. Through this entryway, education moguls flow freely between the city’s gilded corporate enclaves and its pauperized classrooms.

To continue this tradition, Mayor Michael Bloomberg has tapped Cathleen Black, chair of Hearst Magazines, to succeed the outgoing Joel Klein as schools chancellor. The three boast similar corporate-media pedigrees. Bloomberg was a media magnate before his wealth catapulted him into a (legally precarious) three-term reign at Gracie Mansion. Klein was a business lawyer with no background in education when picked for the post.

Embattled union teachers bristled at these changes, seeing Bloomberg and Klein as out of touch with their day-to-day challenges. Moreover, advocates attacked the administration’s coddling of controversial, often overhyped charter schools as an effort to undermine and privatize public schools and constrain unions. But there was little recourse, as the system had few checks aside from a stacked panel that critics saw as little more than a rubber stamp for the Mayor.

Klein’s approach privileged corporate managerial prowess and downgrades the thankless work of teaching long division and iambic pantameter. Did it pay off? Today, the yawning racial gap in academic performance remains massive. Test scores Bloomberg once touted have been revised downward under a new assessment by the state, which has jolted many schools with a drop from previously distorted grades.

Now the city has hired a media executive to heal the school’s political, economic and ethnic fissures. Activists have already derided Black’s private-school background and what appears to be her unabashed cluelessness. She recently pleaded for “patience as I get up to speed on all of the issues facing K-through-12 education today.” Unfortunately, patience is one virtue New Yorkers do not possess in abundance when dealing with opaque school officials.

Yet in the wake of Klein’s reform blitzkrieg, students, teachers and parents are wary not to endorse rash change just for change’s sake. What’s missing from the reform equation isn’t momentum, it’s a community-wide deliberation on how to create an environment for meaningful learning and developing intellectual confidence.

Black will step into a battleground of school reform fraught with competing union and mayoral agendas, litigation over school closures, slashed budgets and brain-choking standardized tests. The actual experience of learning may well get lost once again in the din of partisan bickering.

To progressive-minded teachers, there’s no magic reform bullet, and that’s the delusion that got so many public schools into trouble. The solution starts with following the wisdom of responsible, and responsive, educators who know how a school functions: how to keep a kid’s attention for 45 minutes straight, how to defuse a playground fight, how to speak to parents about a boy’s lackluster report card, or fight for more resources when the supply cabinet goes empty again.

Similarly, engaging students in school governance gives youth a sense of ownership, and a stake in the success of their school. Finally, politicians must tamp down the messianic rhetoric and recognize that structural poverty, discrimination, and poor health care can impact academic life as well, and neither kids nor schools can be “fixed” in isolation of these environmental challenges.

Education scholar Diane Ravitch recently explored the charter school craze, represented in the film Waiting for Superman, as a microcosm of the flawed mentality driving many reform efforts, in the New York Review of Books:

If we are serious about improving our schools, we will take steps to improve our teacher force, as Finland and other nations have done. That would mean better screening to select the best candidates, higher salaries, better support and mentoring systems, and better working conditions….

We should also insist that only highly experienced teachers become principals (the “head teacher” in the school), not retired businessmen and military personnel. Every school should have a curriculum that includes a full range of studies, not just basic skills. And if we really are intent on school improvement, we must reduce the appalling rates of child poverty that impede success in school and in life.

If we insist that teachers should master all aspects of their craft, and that school administrators should apply their grasp of pedagogy in their oversight, then why tap a publishing executive to manage all of the above?

That’s the question that Black’s tenure will have to address, answering not to the city’s chief executive but to everyday people, who embody the city’s greatest potential investment. After years of Bloomberg’s attempts to run urban schools like Fortune 500 companies, communities have no time to waste to reclaim their greatest public good from private hands.