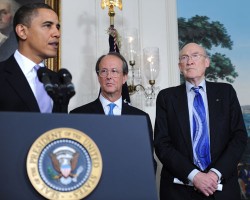 It’s impossible to take the “Deficit Reduction Commission” seriously when its co-chairs propose slashing taxes on the very rich—dropping the top rate from 35% to 23%—thereby adding tens of billions to the deficit.

Or how about increasing the deficit by restricting Congress’ ability to collect taxes on income made by corporations or individuals outside the United States, thereby reducing or eliminating taxes on American expatriates and revenues companies earn abroad?

Two top CEOs estimated that “American companies have about $1 trillion in profits stashed abroad,” as a New York Times editorial put it, but were unwilling to bring the money home if the money were subject to normal tax rates.

Revealing their overall perspective on re-shaping American government, commission co-chairs Erskine Bowles, a Democrat and former advisor to President Bill Clinton, and former Wyoming Sen. Alan Simpson avoided pressing these corporations to contribute their fair share toward reducing the deficit this week when theyoutlined the commission’s proposals, set for an official release next month.

This draft report was thus not about slicing the deficit, but shrinking those portions of the government on which the poor and working class depend and shoveling new benefits to corporations and wealthy, at a time when the richest 1% already rakes in 23.5% of all U.S. income.

Clearly, the bipartisan duo of Bowles and Simpson saw the commission as their chance to unfold an influential blueprint that, even if not adopted in full, would nonetheless shift public expectations back toward the day when working Americans were on their own and only corporations and the rich could count on the government to bail them out in hard times.

No wonder that AFL-CIO President Rich Trumka summarized the message
of the report to workers in these terms: “Drop Dead!” Bowles and Simpson want to “scrub out” the political influence of organizations that represent working people, young and old, so that programs designed to serve them can be radically cut back or eliminated.

From the start, Bowles and Simpson blamed “entitlements” for the
current deficit and long-term national debt. The Deficit Commission thus earned the nickname of the “Catfood Commission, ” as the chairs were expected to promote vast cutbacks in Social Security that would relegate seniors to surviving on pet food.

Bowles and Simpson lived up to the nickname: They recommend raising

But the attacks on these much-vilified programs—now increasingly suspect because of the constantly repeated myth that Social Security is on the brink of bankruptcy—are just part of a comprehensive onslaught against working families.

Among the most outrageous and harmful proposals:

Bowles and Simpson are obviously oblivious to the additional misery
these steps would impose on alread-overburdened working families.

The U.S. working class is already going through prolonged
unemployment, wage cuts, the loss of health benefits, home
foreclosures, and caring for sons and daughters who come home
damaged from Iraq and Afghanistan. But any hint of this is absent
from the report’s recommendations.

Notably, the co-chairmen avoid any discussion of a financial
services tax, which would help pay down the deficit by taxing
financial transactions on Wall Street. As economist Dean Baker points out,

Simpson and Bowles apparently never considered a Wall Street financial speculation tax (FST) as a tool for generating revenue. This is an obvious policy-tool that even the IMF is now advocating, in recognition of the enormous amount of waste and rents in the financial sector.

Through an FST, it is possible to raise large amounts of revenue, easily more than $100 billion a year, with very little impact to real economic activity.

The refusal to consider this source of revenue is striking since at least one member of the commission has been a vocal advocate of financial speculation taxes. It is also worth noting that Mr. Bowles is a director of Morgan Stanley [which would heavily affected by such a tax].

It should not be surprising that Bowles and Simpson—and an unknown
number of the 18-member Deficit Reduction Commission (certainly Rep. Paul Ryan, R-WI)—somehow ascribe the current economic downturn to excessive federal spending and debt.

Baker counters that the economic crisis was rooted in housing speculation and the resulting Wall Street crash, and that current deficit spending–in the context of the Great Recession—is actually needed to prevent far worse economic damage.

But much like the Tea Partiers, the purported Democrat Bowles appears to believe that the downturn was produced by too much government spending, a claim utterly lacking in evidence or logic, as Baker argues:

This situation [the recession] is not the result of government deficits, contrary to what Mr. Bowles seemed to suggest at the do-chairs’ press conference today. The downturn was caused by the bursting of an $8 trillion housing bubble. …

The large government deficits are the only factor sustaining demand following the loss of this bubble wealth. If today’s deficit were smaller, we would not be helping our children; we would just be putting their parents out of work.

‘SPREADING THE PAIN’ OR CONCENTRATING THE GAINS?

But the report is not being universally condemned. The conventional
wisdom that dominates elite discussion is reflected in the mildly
liberal Chris Matthews, host of MSNBC’s Hardball, insisting that
the Bowles-Simpson report is about “spreading the pain” of grappling
with the deficit and long-term debt. In fact, their solution is about closing off access to government resources to the majority and “concentrating the gains” from subsidies, de-regulation, and low taxes on corporations and the super-rich.

The diagnosis of the national debt offered by Sen. Bernie
Sanders, the independent Democratic socialist from Vermont, is far
more convincing than the customary rhetoric about “entitlements”
issuing from the mouths of Bowles and Simpson:

The huge increase in the national debt in recent years was caused by two unpaid wars, tax breaks for the wealthy, a Medicare prescription drug bill written by the pharmaceutical industry, and the Wall Street bailout.

Unlike Social Security, none of these proposals were
paid for. Not only has Social Security not contributed a dime to the deficit, it has a $2.6 trillion surplus.