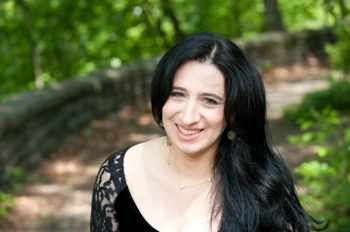 Growing up as a teenager in the 1970s, Mimi Cohen never felt as attractive as the other teenage girls she knew. She rarely saw any women with her Semitic features in the media, which led to her feeling “completely self-conscious all the time.”

Then one day she came across an album cover featuring the image of Laura Nyro, the cult singer-songwriter who wrote such hits as “Wedding Bell Blues,” “Stoney End” and “Stoned Soul Picnic.” Nyro’s features mirrored Cohen’s own: dark eyebrows, full lips, and a classic Semitic nose. The fact that Nyro was not only considered beautiful by many but was the leading singer-songwriter of her day changed Cohen’s way of thinking about herself.

“I felt like I didn’t have to conform to whatever the beauty image was,” says the Manhattan resident. “I thought there was a light at the end of the tunnel.”

Cohen’s identification with the iconic New York musician (who died in 1997) was the beginning of a journey, which has culminated in her writing and starring in a one-woman musical “To Carry On…” which opens a two-week run at the Cherry Pit Theatre starting Oct. 17.

“To Carry On…” which gets its title from a lyric in “Nyro’s song “And When I Die” tells Cohen’s own story while weaving Nyro’s music throughout its plot. In the story, Cohen speaks to an off stage daughter about the daughter’s beauty issues while describing her own awkward, formative years before her discovery of Nyro.

“You walk into the theater and I say ‘Honey, what’s the matter with you? You want a nose job? You’re crazy — listen to this girl,’” explains Cohen.

Cohen conceived of the concept of “To Carry On…” when she was taking a playwriting class, “Writing for Solo Performance,” taught by Gretchen Cryer, who helped define the modern one-person theatrical show with her autobiographical 1978 work “I’m Getting My Act Together and Taking It on the Road.” Cohen’s work was originally slated to be part of a student showcase at the Cherry Lane Theatre, but changes in that theater’s status caused the showcase to get canceled.

Cohen decided to stage the show herself when Cherry Lane began renting out its Cherry Pit Theatre on Bank Street. To finance the production, Cohen is raising money herself through her Web site (mimicohen.net). She was also awarded “fiscal sponsorship” or tax-exempt status from the New York Foundation for the Arts.

Cohen says she hopes the production’s brief debut run in the off off-Broadway venue will lead to a longer run ahead in a bigger house: “I’m looking for a producer to work with – somebody who would champion the show and help me tour it, so I can bring it to colleges. My dream is to have an off-Broadway run.”

Cohen has an ally in Cryer, who is directing the production. Lon Hoyt will serve as the musical director and Victoria Cave, Aisha Dehaas and Jessica Vosk will perform background vocals. Cryer, who is the mother of television star Jon Cryer (“Two and a Half Men”) says she was impressed by Cohen’s talents in several areas.

“First of all, Mimi is a fantastic singer,” explains Cryer, who has been developing the play with Cohen over the past few years. “And she delivers the songs in an unbelievably exciting way. And secondly, Mimi is a very good actress who can do all of the characters in Laura’s life — Laura’s mother, her father, various producers and (Nyro’s manager) David Geffen.

“She was able to give us the life of Laura Nyro and her own connection to that life,” Cryer says. “And I thought ‘This is a really good, valuable piece.’ It’s just so entertaining. I thought that possibly this show really has legs. If anyone loves Laura Nyro’s music, they’re going to love this show.”

Nyro’s music has seen something of a revival in the past ten years, which is ironic considering the Bronx-born artist was virtually ignored in the years before her death of ovarian cancer in 1997. The revival of Nyro’s music has occurred mostly within the theater community, not the pop world. Perhaps this is because Nyro’s music never fit comfortably within either the pop or rock genres, since it defiantly blended strains of jazz, Broadway, rock and avant garde (sometimes within a single song).

In 2001, the Vineyard Theater mounted a successful production of a musical about Nyro’s life, “Eli’s Comin’.” Several actors in that production won Obie Awards, including Judy Kuhn, who took to performing live shows composed of Nyro songs and later released a CD of Nyro covers, “Serious Playground – The Songs of Laura Nyro.”

In the summer of 2009, Kate Ferber premiered her one-woman show at the Laurie Beechman Theater, “One Child Born—The Music Of Laura Nyro,” which mixed Nyro favorites with monologues spoken by Ferber in the character of Nyro.

Although Nyro had limited success on the pop charts, with only one of her songs hitting the Top 100, her first four albums helped create the concept of the singer-songwriter – and especially give a voice to female performers, said Michele Kort, author of the 2002 biography “Soul Picnic: The Music and Passion of Laura Nyro.”

“There were singers and there were songwriters and the twain didn’t really meet – or if they did it was very rarely,” Kort says. “You had Nina Simone and Jackie DeShannon and probably some of the black soul singers but for the most part women singers were products of producers and other songwriters.

“So Laura and also Joni Mitchell really became the prime movers of the singer- songwriter movement, where people’s own experiences as they’ve written them became their material. And that changed everything.”

Kort notes that although Carole King is credited with kicking off the singer-songwriter trend with her landmark 1971 album “Tapestry,” King was influenced by Nyro, who made her debut with the similar “More Than a New Discovery,” which was released in Jan. 1967 when Nyro was just 19. (Ironically, Nyro had been influenced by the many hits King wrote for others in the early 1960s, Kort adds.)

Cohen’s background encompasses both theater and pop. A graduate of the Fiorello H. LaGuardia High School of Music & Art and Performing Arts (which Nyro attended),  she’s best known for being part of the avant-pop duo Gene & Mimi, in which she performed with her husband, Gene Morris. The duo was part of New York’s anti-folk scene, best known for producing performers like Beck and Kimya Dawson.

“The play is very much me,” Cohen says. “I was a girl who just wouldn’t open her mouth and sing, like Laura did and Joni Mitchell did. I needed to just open up and not be self-conscious of my voice in the room.”

“To Carry On…” can be seen Nov. 17-26 at the Cherry Pit Theatre, at 155 Bank Street, located between Washington and West streets. Showtimes are Wednesday-Saturday 8 p.m. There will also be matinees Saturday at 2 p.m. and Sunday at 3 p.m. Admission is $20 with discounts for groups of four or more. Call 212-868-4444 or go to www.SmartTix.com.

Tony Sclafani is a pop music writer who writes for MSNBC.com and the Washington Post Express.