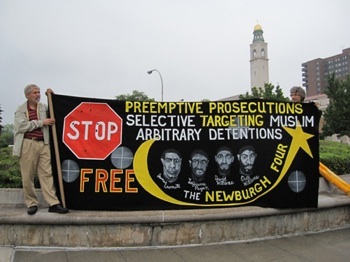 The growing list of cases in which the FBI and police manufacture patently unbelievable terror plots, only to make arrests in the nick of time — such as the Newburgh Four, the Fort Dix Five and the Albany Two — raises a fundamental question: Should the government be allowed to use its almost unlimited resources to induce people to commit crimes, and then turn around and prosecute them for taking the bait?

The legal defense of entrapment was first recognized by the Supreme Court in the 1932 case Sorrels v. U.S., in which the court decided that entrapment occurred when “the design originates with the officials of the Government, and they implant in the mind of an innocent person the disposition to commit the offense.” But who is to determine whether a person has such a disposition, and how?

If it is the responsibility of an accused person to disprove having such a disposition, then it impinges on his or her ordinary right to keep silent and be presumed innocent. This is the state of the law in New York, where entrapment is an affirmative defense. This means that in most cases a defendant would have to take the stand, which would put his or her credibility in question. Federal law, however, puts more emphasis on the conduct of the government. In the 1932 Supreme Court case, Justices Owen Roberts and Louis Brandeis questioned the wisdom of the majority who ruled that it is up to the jury to decide whether a defendant is an “unwary innocent” or an “unwary criminal.” They called the use of entrapment by the government “prostitution of the criminal law,” and pointed out the loss of respect for the law that would inevitably be engendered by the government stooping so low as to set up its own citizens. The dissent wanted the focus to be on the nature of the police conduct, and whether it was such as to cause an ordinary person to commit the crime. They also wanted the question of entrapment to be decided as a matter of law by a judge, permitting dismissal of the charges in advance of the case going to the jury.

The most successful use of the entrapment defense was in 1971, after a group of 28 antiwar activists planned to raid the Camden, N.J. draft board to destroy its records. The FBI planted an informant who helped guide and assist the would-be vandals before they were caught in the act. The jury was given a charge that if it found “outrageous government conduct” it should vote to acquit, which it did. Antiwar sympathies were widespread at the time, and the informant himself felt double-crossed by the government. His testimony proved fatal to the prosecution.

The recurring plot of supposed terror plans composed by people with Muslim-sounding names has the effect of prejudicing a jury pool to believe that the charges are true. The charges framed against the Newburgh Four, the Fort Dix Five and the Albany Two all involved the use of extensive surveillance, undercover agents, staged press conferences, secret evidence and vague material support charges. Inducements, including cash, were offered to take advantage of the defendants’ youth and economic desperation.

The informers in each of these cases were paid hundreds of thousands of dollars to selectively tape record intemperate statements. Yet it took years to provoke the defendants into taking even one step toward a manufactured bombing plot, so how could they be “predisposed?”

Entrapment has been claimed in many of the post-9/11 terror conspiracy trials, but so far, unsuccessfully.

It is time to ask whether an unbiased jury can be found in New York, following 9/11 and years of anti-Muslim propaganda. While juries in entrapment cases do have the freedom to express community standards and determine when police practices go too far, it seems that juries are now too scared to do so.

The Newburgh jury deliberated for eight days before convicting on all counts, and sent repeated requests to Judge Colleen McMahon for further instructions, such as “If it’s entrapment on count one does it mean all counts are entrapment?” Ultimately, this is proof that, 80 years later, Justice Owen Roberts of the U.S. Supreme Court was right to be concerned about the susceptibility of juries to manipulation based on fear.

Ann Schneider is a member of the NYC Chapter of the National Lawyers Guild (nlgnyc.org). The opinions expressed in this article are those of the writer and do not necessarily reflect the