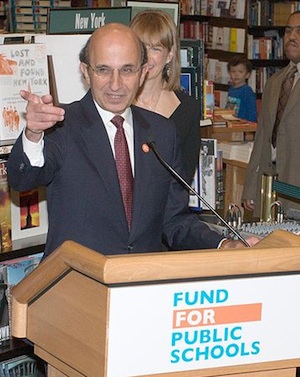 It doesn’t get much more brazen than this.

Since leaving media giant Bertelsmann AG in 2002 to become New York City Schools Chancellor, Joel Klein has repeatedly proclaimed that his drive to restructure the nation’s largest public school system in the image of a corporation was about putting children first and carrying out a “21st century civil rights movement” to redeem public education. Now, Klein is off to work as an executive vice president at News Corp where he will advise Rupert Murdoch on hot new business opportunities in the “education marketplace.” There’s so much money to be made. And who can’t wait to see how Fox News will help make us a better educated nation?

Meanwhile, the man who really control’s our city’s school system, Mayor Michael Bloomberg, has installed Cathie Black, another corporate media functionary, as the new head of the the NYC Department of Education. Black oversaw magazines like Popular Mechanic, Good Housekeeping and Cosmopolitan as a top executive at the Hearst Corporation. She attended private schools and has zero experience as an educator. Her own children attended boarding schools in Connecticut. So much for the needs and concerns of the school system’s 1.1 million schoolchildren and their families, many of whom have grown increasingly restless with the way the city’s schools are being run.

This is what you get when you set aside basic democratic principles to hand one man absolute power as the State Legislature did when it approved mayoral control of the NYC schools in 2002 and renewed it in 2009.

Some critics are calling on State Education Commissioner David Steiner to deny Black the waiver she will need to since she lacks the requisite experience normally required to hold such a post. While this presents a good opportunity to attack the legitimacy of Bloomberg’s absolute power over the schools, don’t expect to see many elected officials jump into that fray much less take on the battle that really matters: ending mayoral control.

Most local electeds who have future political aspirations fear Mayor Bloomberg’s wealth, his connections and his influence over the city’s daily press, especially the tabloids. They may squawk about a school closing here and a test score scandal there but mounting a direct challenge to Bloomberg on his signature issue is something they have shown little stomach for to date. They will also correctly point out that the political climate in Albany would make it impossible to end mayoral control – even if the Assembly had the temerity to vote for the end of mayoral control, Bloomberg practically owns the State Senate thanks to his past campaign donations to the Republicans who are likely to become the new majority in that body. Governor-elect Andrew Cuomo also shares Bloomberg’s views on education.

Still, effective movements can change the calculus of politicians. Whether such a grassroots movement against Bloomberg’s education policies can fully take root in New York remains to be seen. But one thing is certain: only when our elected officials begin to fear organized and outraged parents, students and teachers more than they do Bloomberg, will things start to change.

For a sense of what that righteous anger might look like, see this video footage from a school board meeting in January when a crowd of 2,000 mostly people of color came out to oppose Klein and his attempt to close 21 public schools.

For more education coverage in The Indypendent, see our recent back-to-school special issue.