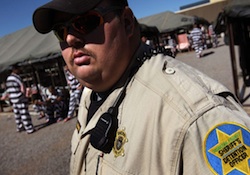 In the shadows of Arizona’s constitutionally embattled immigration law, SB 1070, counties and cities have been crafting and passing equally draconian legislation. That kind of maneuvering had been happening even before Arizona jumped into the spotlight, but as state legislative sessions gear up to start again in January, dozens of bills have been introduced in states like Texas and Arizona that threaten to make life for immigrants and people of color even more treacherous.

According to new research by the Migration Policy Institute, the emergence of municipal laws intended to crack down on immigrants and restrict immigration follows a predictable pattern. When mostly homogeneous, white localities see the population of immigrants increase, those local governments pass anti-immigrant laws. It’s not a surprising finding or an inevitable trend since lots of cities and counties also pass laws to protect immigrants in the face of raging federal deportation policies, but it’s fresh evidence that demographic change and ensuing white anxiety are at the core of the deepening attacks on immigrants.

The MPI report finds that between 2000 and 2009, 107 U.S. towns, cities, or counties passed anti-immigration laws. Over 50 of the local laws that passed are intended to stop immigrants from getting jobs by targeting employers who hire undocumented workers. Thirty-three passed English-only laws and 11 local governments passed laws directing local cops to enforce federal immigration laws. Seventeen localities passed laws prohibiting landlords from renting to undocumented immigrants and seven blocked immigrants from services and programs, even attempting to restrict undocumented kids from attending schools.

Those cities and counties that passed such laws were likely to have seen recent and rapid growth in the number of immigrants living there. According to MPI, the only predictor of where local laws will emerge is the rate of growth of immigrants.

“Not surprisingly,” MPI reports, “growth of the immigrant population as a share of the total population appears to be an important provocation for restrictive ordinances.”

MPI finds that although it’s true that:

[a]necdotally, a number of drives for restrictive policies…followed high-profile crimes or auto accidents involving unauthorized immigrants [or] [c]onflicts over the existence and location of hiring centers for day laborers,

These factors are really just lumped on top of fears about changing communities. Crime is not actually higher because of immigration but individual incidents of crime, or the presence of day laborers on street corners, are used as animating tools by restrictionist groups. Support for the resolutions are drummed up by local politicians and demagogues, as well as national groups that often play a role in drafting the bills, who concoct a narrative about dangerous criminal immigrants. And the campaigns tend to be drenched in vitriolic, hateful, dehumanizing language, namely a dynamic use of the word “illegal” to describe immigrants and the persistent assertion that immigrants are criminals.

In the past decade, the bulk of local proposals emerged during and after D.C.’s failed immigration reform attempt in 2006 and 2007. The line then was that local bills needed to be passed to pick up the slack left by the federal government. Now, in the wake of another round of failed immigration reform efforts, more localities are sure to to pass ordinances and laws, arguing the same thing.

It’s one of the arguments Gov. Jan Brewer made about SB 1070 in Arizona, and it’ll be the same one we hear from state legislators and governors in the months to come. On top of these local ordinances, states are considering dozens of laws that will crack down on immigrants and facilitate the deportation of more non-citizens. The rightward shift of many state legislatures will increase the likelihood of these bills passing.

In Texas, where the legislature will reconvene with a House that’s now 50 seats more Republican than it was last session, there are 15 immigration restriction bills on the docket, according to the Statesman. Included are state legislator Debbie Riddle’s SB 1070 copycat bill. The state’s Republican Governor, Rick Perry, has said that he would not support a Texas version of SB 1070, but there are lots of other bills he would support.

Riddle introduced another bill to increase voter identification requirements at the polls.

Georgia’s Board of Regents, which makes rules for the state’s public universities, recently voted to ban undocumented Georgians from attending college there. Four people were arrested on Wednesday while protesting the Georgia law outside of a Regent’s meeting.

And as advocates fight these state and local immigration laws, the federal government continues to expand its deportation and detention programs. The controversial Secure Communities program, which checks the immigration status of anyone booked into a local jail, is on track to be implemented in every state by 2013. Several counties across the country voted to opt out of that program after the Department of Homeland Security announced that it is optional, but as momentum grew and counties actually voted not to participate, DHS backtracked and made it mandatory.

Secure Communities, along with a set of other federal programs that devolve immigration enforcement to states and localities, are resulting in mass deportation. Now, far from picking up the slack left by the federal government, local and state laws will just deepen what’s become a national level assault on immigrant communities. Almost 400,000 people were deported last year.

There are some glimmers of hope. In Portland, Maine, for example, voters came just a few percentage points away from passing an ordinance allowing immigrants to vote in local elections. For a predominately white city with a quickly growing immigrant and refugee population to come so close to passing a bill to enfranchise newcomers rather than drive them out suggests that the immigration backlash is not inevitable. It’ll take a shift in political culture to get there, but perhaps the changing racial landscape of America can facilitate an opening of our communities rather than a frantic, resentful, and often violent backlash.