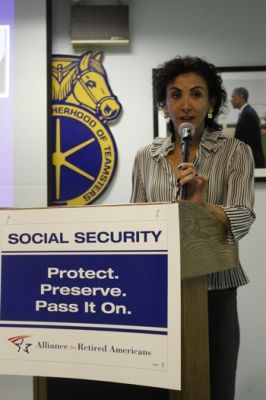 With Social Security on the chopping block, a broad coalition of senior citizen and labor groups met earlier this month to launch the New York City chapter of the Campaign to Strengthen Social Security. Organized by the New York State Alliance for Retired Americans and the New York Network for Action on Medicare and Social Security, participants hope to block proposals to raise the retirement age, cut benefits and privatize social security. Event participants included Teamsters Local 237 and the Gray Panthers NYC Network. Social Security provides benefits to more than 3.1 million New Yorkers. Pia Scarfo (left), the Policy Director for the Institute for the Puerto Rican/Hispanic Elderly, spoke at the Nov. 5 meeting.

Eric Kingson, co-chair of the national Strengthen Social Security Campaign, added that the program “did not cause the current federal deficit problem and must not be used to address it. The program’s already modest benefits should not be cut – if anything they should be increased, as Social Security is a financial foundation for most Americans – and often an economic lifeline.”