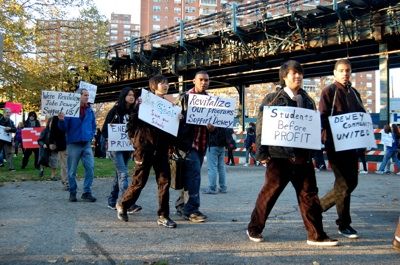 Three days after Joel Klein’s surprise announcement that he was stepping down as schools chancellor, it was back to business as usual at the Department of Education. On Nov. 12, the DOE announced it was considering closing eight more schools bringing the total number of schools at risk of being closed to 55, including 27 high schools.

The DOE is expected to make final decisions on elementary and middle schools by the end of this month, with decisions on high schools being released by mid-December. The Panel for Education Policy, Mayor Michael Bloomberg’s hand-picked school board, will formally vote on school closings, most likely in January or February.

The Department says the schools are at risk of being closed due to poor performance. Many of the targeted schools serve predominantly people of color communities. Critics of the DOE say the schools are being scapegoated for socio-economic ills that exist outside their doors while being denied the resources they need to succeed.

“I’m so exhausted when I come home and then to hear that the school is ‘failing’ and going down and that I am incompetent is just infuriating,” said Michael Solo, a photography teacher in his 14th year at John Dewey High School in Coney Island.

The DOE is currently holding meetings at each school at which parents, staff and community members can speak in support of the their school. At Dewey, supporters of the school are also making their opposition known each Friday morning when they rally and march outside the campus grounds from 7:15 to 8 am. A Nov. 12 rally of Dewey students, teachers and alumni drew 300 people, according to organizers who hope other endangered schools will also begin to hold “Fight Back Fridays.” At least one other school is taking Dewey’s cue: Sheepshead Bay High School in Brooklyn will hold its first Friday protest after school gets out on Nov. 19.

Julie Cavanagh of the Grassroots Education Movement (GEM ) said it was likely that the DOE would also recommend at least 20 school co-locations, an often-controversial move in which privately-run charter schools are allowed to take over parts of already existing public schools. Cavanagh, a Red Hook, Brooklyn elementary school teacher who has published online how-to manuals on resisting school closings and co-locations, said parents and teachers from several schools facing co-locations have contacted GEM for advice on how to mount a campaign against such takeovers.

“Schools that have been very successful are being squeezed out of their buildings,” Cavanagh said.

The DOE is also facing an uproar in Highbridge, Bronx where plans to eliminate sixth grade at P.S. 126 has alarmed school backers who note there are no middle schools in the area and that future sixth graders from the neighborhood will have to take two busses to get to school.

“Is it reasonable for a child to go through the stress of rush-hour bus routes? Lateness will be their norm and there are already challenges to their success in middle school and beyond,” community activist Agnes Johnson wrote in an email to supporters.

ON THE CHOPPING BLOCK