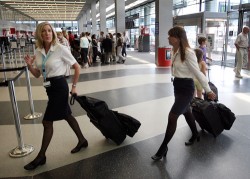 All of US Airways’ gate and ramp employees are currently unionized, with baggage handlers making $20 per hour. But baggage handlers at nonunionized work subsidiaries of US Airways Express, like Piedmont, make just half that. With Piedmont previously unorganized, US Airways is able to shift its passengers and flights to one of its nonunion subsidiaries, undermining and decreasing the need for the company’s unionized gate and ramp workers.

But because Piedmont workers are now organized into a union, not only will Piedmont working conditions improve, but unionized US Airways employees will no longer be threatened by having work shifted to lesser paid Piedmont employees. (Full disclosure: I began working as a part-time consultant on CWA’s campaign to organize airline workers in September.)

Piedmont workers overcame a tough campaign of employer intimidation, including firings, which I highlighted on this website back in September (“Despite New Hailed Organizing Rules, Airline Workers Still Face Tilted Playing Field“). But workers were aided by the National Mediation Board (NMB) ruling, which governs labor relations in the airline and rail industries, making it easier for unions to organize. Under the older rules, as we highlighted in May, “If a worker didn’t vote in a union election, that person’s “vote” was counted against the prospective union.”

Last year, when CWA tried to organize Piedmont Airlines, workers faced exactly this problem. Not a single worker voted against the union, but the union still lost the election by 58 votes because only 49% of the total workers voted. Piedmont further stacked the deck against the union by adding to the potential voters list workers who could not vote because they were dead, didn’t work at Piedmont anymore or were serving overseas in the armed forces.

Defeat at Delta, but campaign continues at American Airlines

CWA didn’t fare well across the airline industry last week, however. Despite the improved NMB ruling, the union lost by 328 votes out of 18,760 cast at Delta Airlines last week. As a result of this ruling, 7,000 Northwest employees, whose airline is now part of Delta Airlines, will now lose their union representation.

Flight attendants allege massive illegal interference and union busting on the part of management. Management made harassing phone calls to employees hammering home Delta’s talking points on the union election, they allege.  Union elections observers also say the turnout in the election was unusually high with 94% of eligible workers voting. They allege the reason for this high turnout was that management used sophisticated computer technology to manipulate the voting.

Flight attendants would log in for their flight assignments, as required, and the first screen that popped up for be one asking if they had voted and directing them immediately to the NMB site. It’s clear to us that Delta was tracking the voting. This kind of surveillance is a violation of the confidentiality and secret guarantee of the voting process under NMB rules.

Undeterred by the results at Delta, CWA plans to take advantage of the momentum from the Piedmont Victory to organize 13,000 agents at American Airlines, where unionization drives have failed in the past as a result of the old NMB rules. The union expects an election at American Airlines sometime next spring.