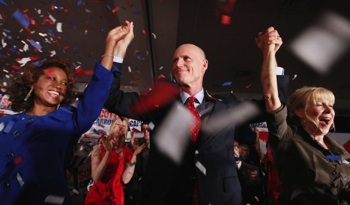 With all the attention on the Republicans’ surge in Congress this month, it’s easy to miss the arguably bigger news of the midterm elections: What went down in the states.

Republicans will now control both the governor’s office and legislature in 20 states, more than twice the states where that was the case before the election. Half of state legislatures are fully in Republican control and another seven (and maybe eight, depending on the outcome of the New York elections) are split. Twenty-nine governors’ mansions will now be home to Republicans, six more than reside in them now.

The candidates ran on platforms railing against government spending broadly, against the federal government and in favor of tax cuts. They often played to racial and class resentments to attack vital social safety net programs. Once in office, they are likely to have at least as striking an impact on the lives of folks trudging though a miserable economy as Congress.

States are tasked with managing most of the public programs that keep us all moving in the best of times and alive in the worst. Medicaid, public education, social safety net programs and public transportation are managed by states and paid for with a mix of state and federal dollars. Now, with state budgets facing unprecedented shortfalls, unemployment expected to remain high and tax revenue at a relative trickle, governors and state legislatures must balance their budgets somehow. Increasingly, public programs will head to the chopping blocks as ascendant Republican state legislatures and governors refuse to raise taxes or close tax loopholes.

They’ll find there’s not a whole lot of easy stuff left to cut, because in the last three years of the economic downturn, 46 states and D.C. enacted budget cuts. Most of those came directly out of programs like education, transportation, public health and support for the elderly. States also fired a lot of public employees, which means that there are fewer people to deal with the growing demand for public services in a downturn.

Nor can they expect another round of the help the federal government provided through the stimulus. Last fiscal year, the cumulative budget shortfall in all states would have been almost $200 billion dollars, but Recovery Act funds cut that to $123 billion. The projected cumulative shortfall for next fiscal year is somewhere around $134 billion, which would be the highest since the recession began.

On the campaign trail, few of the anti-government candidates offered specifics about where they’d make cuts. Instead, candidates constructed straw men and beat them into a pulp. In Pennsylvania, Governor-elect Tom Corbett railed against waste by pointing to things like the incumbent’s decision to move a statue from the governor’s mansion to the Department of Labor and a plan to build a new library. In Florida, Governor-elect Rick Scott proclaimed he’d make welfare recipients get drug tests. It’ll take a great deal more to close $134 billion in funding gaps.

While it might be possible to win an election by stumping about statues and invoking the political ghosts of “welfare queens,” you can’t actually balance a budget that way. If anti-government lawmakers hope to balance budgets solely with cuts, rather than taxes, there are not a lot of options. About four-fifths of state spending goes to healthcare, education, human services and public safety. Voters say these are things they in fact want government to spend on, but unless jobs with real wages miraculously return or states raise taxes, these programs all stand to get gouged.

In his acceptance speech, Pennsylvania’s Governor-elect Tom Corbett, offered this obtuse proclamation: “We have the opportunity to bring fiscal discipline to Pennsylvania, to bring limited government and to bring free enterprise to Pennsylvania.” He’s one of a number of new governors who say they want to run government like a business, cut spending and privatize as much as possible.

“In the elections, we heard candidates talk about cutting government and they didn’t want to talk about the specifics because they knew they’d get push back,” said Sharon Ward, director of the Pennsylvania Budget and Policy Center. “But the truth is, they are not going to be cutting government. They are going to be cutting seniors and schools, transportation and health care.”

Take education. Pennsylvania currently has a formula to fund education that distributes tax dollars to ensure some semblance of equity between low and high wealth districts. But “that system takes investment and it may end,” says Ward. “The most affected would be districts that are low wealth, communities that don’t have shopping malls or industry and so have a limited tax base…. Communities of color are low wealth school districts and it will hit working class whites as well.”

Public school funding has already been cut in 34 states and D.C. since the start of the recession, according to the Center for Budget and Policy Priorities. And 43 states have cut higher education. In California, tuition for public university has increased by 32 percent since the the 2009-10 school year, though newly elected Democratic Gov. Jerry Brown has indicated that he will not continue slashing higher education.

Most of the state cuts around the country are, of course, going to impact poor people the most. And that’s a category of people that’s larger than it’s been in a long time. The Census reported that the poverty rate rose to 14.3 percent last year, the highest in half a century. And increasing desperation is not evenly distributed. Black household incomes fell 4.4 percent in 2009—close to three times the decline for whites—and the number of black families living below the official poverty line went up by 7 percent between 2008 and 2009.

Some states are getting poorer at a higher velocity than others. These include Texas and Florida, which saw the largest annual increases in poverty between 2008 and 2009. Both are now controlled entirely by Republicans. The Texas GOP’s legislative majority is now 99 to 51. In Florida alone, where Republican Governor-elect Rick Scott will join a Republican-controlled legislature, a third more people became poor between 2008 and 2009.

Scott has pledged to create 700,000 jobs. But he wants to cut 5 percent of the state workforce to reduce spending, which of course, will increase unemployment. Meanwhile, he’s proposed tax cuts, despite the clear fact that such a move would reduce revenue needed to fill his state’s looming $2.5 billion deficit.

He also proposed plans to privatize healthcare by making drastic cuts to Medicaid and providing recipients with vouchers with which they can fend for themselves in buying expensive private coverage.

In general, state governments will have a lot to do with health care as the federal reform plan gets implemented. Beltway Republican threats to repeal President Obama’s reform wouldn’t likely clear his veto. It is entirely possible, however, that states, which are responsible for implementing the component parts of health care reform, could gut it piece by piece.

“The big thing to watch in the health care reform process is state implementation,” says Nicholas Johnson, director of the State Fiscal Project at the Center for Budget and Policy Priorities. “The health care reform law left a lot of decisions up to the states. In areas from what kind of health benefits will be provided to low income people who are now eligible for Medicaid to what kind of regulations will be places on exchanges.”

Before health care reform goes into effect in Texas, which is always cutting things, the buzz is that some state legislators want to pull out of the Medicaid program. That’s right. They’d end Medicaid altogether. Lawmakers in South Carolina and Washington have floated the same idea.

Ohio’s new Republican governor sounds a lot like Scott and Corbett. Governor-elect John Kasich says he too will reduce taxes and make the state more business-friendly to fill the revenue gap left by the tax cut. But like all such plans, what this will mean in practice is that poor people, sick folks, students and the elderly will get the shaft.

“We took a step forward to shrinking government and making it better,” Kasich declared in his acceptance speech. “Ohio has said it wants to run our state in a new way.” But Ohioans may be in for a shock when they see what a new way looks like.

To be clear, it’s not only Republicans who will make cuts to programs. In New York, Governor-elect Andrew Cuomo will arrive on the job facing a $9 billion budget deficit. Nonetheless, he’s standing by a commitment to allow a tax on the richest New Yorkers to faze out at the end of next year. According to Crain’s, that would cost the state over $1 billion by the end of the budget year that ends on March 31, 2012, and $5 billion in the following year.

Lowering taxes on the rich will mean money will have to come from elsewhere, and the only other places to look are public programs. Speaking about a property tax cap Cuomo has proposed, James Parrott of the Fiscal Policy Institute told Crain’s,  “If you prevent local taxes from going up, you will have to reduce school funding.”

But there are some long-term glimmers of hope in the states. Connecticut for example, bucked the national trend, rejecting an anti-government candidate in favor of Democrat Dan Malloy. And in Michigan, where Republicans took the governor’s mansion and both houses of the state legislature, Maureen Taylor, an organizer with the Michigan Welfare Rights Organization, who has been an leader in anti-poverty movements for decades had this to offer: “It’s going to be harder. It’s going to hurt more. But we’re going to keep moving. Our agenda does not change. We are mounting campaigns. We’ll keep going.”