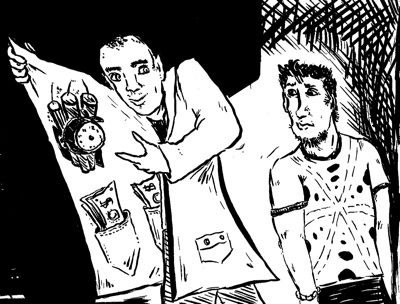 He’s a manipulator. He’s a con artist. This is a damn bad motion picture,” said Alicia McWilliams-McCollum on an Oct. 6 episode of Democracy Now!. She shot a hard glare over her glasses. “They should be ashamed of theirself.”

The con artist was informant Shahed Hussain, a Pakistani caught in an illegal license scam by the FBI and given amnesty in exchange for spying on American-Muslims. The “bad motion picture” was a terrorist plot he created by luring poor, angry men into acts of violence with promises of money. McCollum’s nephew David Williams was one of the Newburgh Four, a group who plotted to blow up synagogues and shoot down planes. His brother Lord, 20, was dying of liver disease and the family could not afford surgery, so Hussain offered Williams $25,000.

The story is repeated in other domestic terrorism cases. The informants flash folds of cash to desperate men, stoke their rage with the language of jihad and lead them into the crosshairs of the police. Instead of catching criminals they are creating them. The FBI has become a Terrorist Factory.

McCollum was right in calling it a “bad motion picture” because like a film the men were cast into roles they did not write. Centuries before 9/11, the East was a blank canvas for the Western mind. After the prophet Muhammad died in 632 A.D. his armies carried the banner of Islam as far as Southern Europe. He was seen as an evil heretic and the Orient as a mystery. This imagery, based on people’s fear, was used by ambitious kings to rouse religious hatred. In 1095 A.D. Pope Urban II launched the First Crusade, and as sword struck scimitar the myth of the Arab Enemy began.

Each wave of conquest of the East — from the Crusades to the Colonial Era — left racist imagery in its wake. Camels, belly dancers, opium dens, moonlit sand dunes, mummies and magic were stock clichés used to hide their humanity. In the modern era it is the Arab terrorist that has us riveted.

After 9/11, we weren’t just consuming images of the Arab enemy — we were projecting it onto every brown face. After the towers fell, Arabs and Southeast Asians were left bloody on the sidewalks in Queens; in the Iraq War men were jailed en masse; and in May 2010 Sen. Lieberman (I-Conn.) introduced The Terrorist Expatriation Act to strip citizenship from anyone suspected of aiding terrorists. The American audience has gone from consuming the narrative of the Enemy Muslim to being consumed by this imagined demon.

In Lenin and Philosophy, Louis Althusser wrote that the goal of ideology is to recreate the conditions of society by shaping the consciousness of individuals to fit a social role. He said that ideology “recruits subjects among the individuals.” But what we’ve seen instead is a “forced recruitment” in which people are transformed against their will into the character of the Enemy Muslim, such as with the Newburgh Four.

Our media, military and criminal justice system are Terrorist Factories manufacturing enemies. In creating evil we also recreate the legitimacy of the state and American innocence. When grim politicians announce a newly “terrorist” foiled plot, they are implicitly saying, “See how we keep you safe?”

But they can’t keep us safe because terrorism is the price of empire, and it’s being paid by our citizens — on Oct. 18 the Newburgh Four were found guilty.