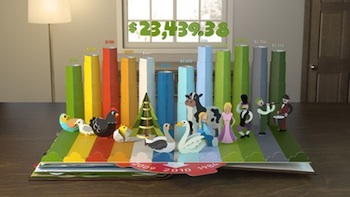 While many Americans wonder how they’re going to afford heat, food, and medicine this holiday season, one wealth management company asks a perrenially relevant question: Exactly how much would it cost to buy every single gift mentioned in the English carroll, The Twelve Days of Christmas?

At the time the carrol was first published, circa 1780, bonded servitude was still a going concern. However, instead of putting a price on human life, PNC Wealth Management uses estimated hourly wages to compute the true value of Christmas.

Lords experienced much stronger income growth in 2010 than milkmaids. The cost of ten lords-a-leaping was $4,766.70 (+8.0%). Analysts suspect that the surge in lord earning power reflects neither a decrease in lord supply, nor an increase in lord demand. More likely, skyrocketing lord appearance fees are due to aggressive advocacy by the lord lobby.