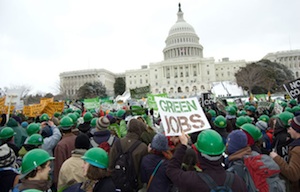 Green jobs are in the news, again. This time, Monica Potts asks where is the green economy, that was sold to America by Obama and company, in the American Prospect.

Two years ago, the rage was green jobs not jails, a clever framework by the racial justice movement to refocus environmental advocates to think about humans, not just the dolphins and rainforests, in our transition to a post-fossil fuel society. Today, however, millions have been funneled into green job training, but to what end? I’ve written on the need for green job creation, not just training before, as has Jonathan Yee on the history of job training, post-Reagan.

For communities of color, we need jobs, of any color, be they green or otherwise. Sadly, this is the piece that is missing from policy proposals right now. With a divided Congress and a President that operates by reaction rather than vision, the possibility for public intervention in creating employment is slim.

If I had my druthers, my three-point platform for economic recovery would include a federal plan to bail out regions and local communities, to stave off budget cuts, much like the proposed House bill, the Local Jobs for America Act, which has been in sitting in limbo since March of this year. The bill proposed to provide fiscal relief to local government and community-based organizations to save and create local jobs that provide services to communities.

Even if green jobs are created, chances are that they’re not going to people of color and women. In Los Angeles, I wrote about the passage of the retrofit ordinance by the city, largely due to the mobilizing efforts of a coalition of unlikely partners, comprised of community-based organizations, labor, and environmental groups. The ordinance commissions the retrofit of city buildings and requires high quality labor practices, such as local hire and project labor agreements, to be in effect for the workers employed. The city benefited from the federal stimulus package, receiving over $16 million, as well as additional funds from a municipal bond.

But, even still, the monies are being used to save existing jobs for municipal employees, not create new ones. This month, 40 people will start a 10-week boot camp to train to become green workers for the city. All are existing city employees.  What we need now is policy that creates jobs on a large-scale and targets communities of color for employment.

Concurrently, we would invest in innovative strategies that build community economies, new ways of producing value that don’t reproduce the unequal social relationships and racist hierarchies that plague capitalism.

Take the example of the Alliance to Develop Power (ADP) in western Massachusetts. They started by facilitating the purchase of five apartment complexes by tenants and converting them into tenant-owned housing cooperatives. Now, the organization sits on an empire worth over $80 million, and created 60 jobs for its members. Twenty worker-owners are employed at United for Hire, a worker-owned contracting firm that is now expanding into weatherization and green retrofits.

“We fight for just policy, while, at the same time, create the world as it should be,” explained ADP’s Executive Director Caroline Murray recently to me. “We believe in shared power, not power over, and everyone making the decisions that affect our lives.”

It’s this kind of transformative thinking and strategy that should guide green job creation and economic recovery. How can we truly reconfigure power, work, and social relationships so we have a green economy that sustains the planet and all its peoples? Short-term fixes by training people for green jobs that don’t exist simply won’t do it. Neither will replicating the gray capitalist economy, washed over in green.