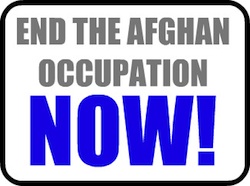 Persistent waffling on dates for American troop withdrawals from Afghanistan has eroded any remaining patience with the Obama White House among peace activists and voters, a majority of whom favors a timeline for US troop withdrawals.

Nancy Youssef of McClatchy reports that the White House has decided to de-emphasize its pledge to begin withdrawing US forces by next July, and adopt a new goal of withdrawing by 2014. The New York Times on Nov. 11 described the new policy as “effectively a victory for the military.” Seeming to miss the point entirely, the White House immediately declared it was “crystal clear” that there will be no change to the July 2011 date for beginning the drawdown.

The credibility problem is that the White House has never defined the scale of its initial drawdown, lending credence to reports that the elusive pursuit of “success” will take years. Filling in the blanks is the only way the White House can repair this image crisis. For example, Obama could promise to withdraw 50,000 US troops between 2011-2012, a number that would dispel the aura of tokenism and weakness which now surrounds US policy. The moderate Afghanistan Study Group, whose members have ties to the White House, has proposed withdrawing 32,000 by next October and another 38,000 by the following July. The AFG has stated, “The U.S. cannot afford to continue waffling on its commitments, lest it lose what little credibility it has with Afghan people.  Reneging on the July deadline will also likely have adverse political effects given that war is already very unpopular.

The president is expected to clarify his goals at a NATO conference this week. America’s leading military partner, the United Kingdom, with some 9,500 troops, has already floated 2014 as the deadline for its troop departure. Canada, France, Italy, Poland, Sweden and the Netherlands, whose combat troops total a combined 14,850, are all in the process of withdrawing by 2014 at the latest.

The projected costs of another three years are staggering and rarely reported. Assuming the current pattern of American casualties and costs through 2012, followed by a fifty percent reduction in those figures in 2013-14, Pentagon data reveals the following:

In plainer terms, the projected American casualties and costs in Afghanistan alone will double in the next three years from present levels.

According to the current Foreign Affairs, the war in Afghanistan is now more than twice expensive as Iraq [Altman-Haass, “American Profligacy and American Power”, Nov.-Dec. 2010, p. 31].

Those numbers do not include Pakistan, Yemen or tens of billions in the growing US intelligence budget. Nor do the tax dollar figures include rising indirect costs such as veterans’ health care. Nor are the casualties civilians known or estimated.

Perhaps the greatest policy question is what the American troops are fighting for. According to the CIA, there are no more than 100 Al Qaeda militants lingering in Afghanistan. Their sanctuaries have moved to Pakistan and CIA officials have recently said, “the Yemeni cell posed an even more dangerous threat to the United States than the Qaeda headquarters in Pakistan.” [NYT, Oct. 17, 2010]

Meanwhile in Afghanistan, American troops are fighting and dying to prop up an Afghanistan regime that is riddled with corruption, lacks a sufficient army to defend itself, and maintains power by fraudulent elections.

The cruel pathos of the American situation is summed up in two options sketched by Gideon Rose, the new editor of Foreign Affairs, the organ of the Council on Foreign Affairs:

First, “at best, Afghanistan could become another Iraq, with strong late innings gaining the United States the opportunity to draw down its forces gradually” or, second, “it could be a replay of Vietnam, with the White House deciding to pull the plug on a thankless struggle in a strategically marginal country.” A third option is ignored, that of another massive terrorist attack on the US provoked by the drone attacks and night raids in Afghanistan and Pakistan. [NYT, Nov. 5, 2010]

There is another cost, too. The constant drain in blood and taxes for the long wars may soon become a terminal drain on any hopes for the Obama presidency.

Tom Hayden is a former state senator and leader of Sixties peace, justice and environmental movements. He currently teaches at PitzerCollege in Los Angeles. His books include The Port Huron Statement [new edition], Street Wars and The Zapatista Reader.