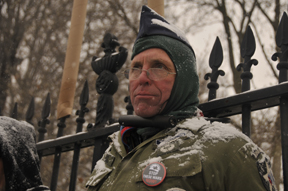 After a 10 a.m. rally in Lafeyette Park featuring Daniel Ellsberg of Pentagon Papers fame, retired CIA officer Ray McGovern, Dr. Margaret Flowers of Physicians for a National Health Program, and others, activists formed a solemn single-file process to the White House, silent except for a drum beat. There, they encountered police barricades. Some veterans began climbing over the barricades, until the police opened them up, allowing people to approach the fence in front of the White House.

As the light snow increased to heavy and began accumulating, activists kept warm by singing and chanting. At about 12:30, police began arresting protesters who remained along the fence, while supporters who did not want to risk arrest were moved across the broad street. Some of the demonstrators stood in the snow and freezing temperatures for nearly four hours before being taken to Anacostia processing center and released. They have all since been released. Some have elected to pay a fine, while others, including Ellsberg and McGovern, will go to trial on the charge of disobeying a lawful order.

More information about the veteran-led civil resistance to wars