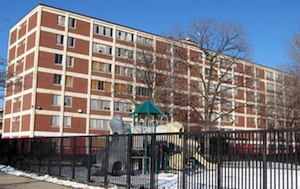 Chicago’s getting ready to demolish one of its most infamous housing projects, and the news is shedding new light on the debate over the utility of urban renewal and redevelopment projects in major American cities.

Only two families remain in the Cabrini-Green, a notorious housing project often called one of the nation’s worst and most violent by politicians. The towering block structure used to house up to 15,000 residents, and the two families that remain have been given orders by a federal judge to relocate by next Tuesday.

News of Cabrini-Green’s demolition led Chicago Mayor Richard M. Daley to declare the end of a “troubled era of public housing policy that warehoused large concentrations of poor people,” according to NPR.

“It destroyed families,” Daley reporters. “It moved people from rural communities into high rises. They had no supportive services and it completely failed.”

The demolition is part of Chicago’s decade old Plan for Transformation, which is focused on moving residents from densely populated, high and mid-rise public housing units to 25,000 mixed income low-rise units.

The shift is alarming to some watchers, who claim that residents aren’t always better off in their new environments. Indeed, some have reported intense feelings of isolation.

“I love Cabrini; you know, we was like, we were like one big family,” lifelong Cabrini- Green resident Kenneth Hammond told NPR.

As Michelle Chen pointed out back in August, it’s not just bullets that are scarring Chicago’s public housing residents. Although residents reported generally feeling safer in new settings, studies have shown that even after residents are relocated, they still carry the emotional and physical scars of having lived in badly underresourced communities. Chen highlighted the Urban Institute’s follow-up to a long-term study of former residents of another housing project, Madden/Wells, which was demolished in 2008, noting that nearly all residents surveyed reported that their health symptoms had gotten worse, not better, since being moved.

In 2009, more than half (51 percent) of respondents identified their health as fair or poor, up from 37 percent in 2001. By comparison, just 13 percent of the general population reported fair or poor health; the figure for black women (who tend to be less healthy than average) is 20 percent.

Which is to say that relocation alone doesn’t do much unless there are resources attached. And the absence of those resources, coupled with the outdated notion that residents will magically be healthier, happier, and upwardly mobile because of their proximity to higher income new neighbors, runs the serious risk of repeating the same mistakes that have long plagued public housing in the first place.

Last spring, members from the Right to the City alliance, a national network of housing activists, released a report arguing that public housing works, when cities invest in it. The big picture argued here was that public housing hasn’t become a “failure” simply based on its own merits; it’s instead been the target of massive federal disinvestment. In the years 2002 to 2008, public housing lost nearly $3 billion nationally in operating subsidies. That’s huge.