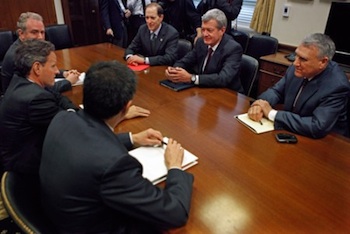 On their deadline—Wednesday, Dec. 1—the co-chairs of President Obama’s Fiscal Commission promise to present a plan to reduce annual federal budget deficits and accumulated debt, even though they are delaying a vote of the 18-member, bipartisan, fiscally conservative body until Friday.

But the nation would be better served if Erskine Bowles, former chief of staff to Bill Clinton, and former Wyoming Republican Sen. Alan Simpson shredded their proposal. Then they should submit instead either one of the two proposals from progressive groups that were unveiled on Monday and Tuesday (or the earlier, less fleshed-out proposal from Rep. Jan Schakowsky, a Commission member).

The progressive proposals—from Schakowsky; from a “Citizens’ Commission on Jobs, Deficits and America’s Economic Future” (convened by the Institute for America’s Future); and “Investing in America’s Economy” from Our Fiscal Security (a partnership of three leading think tanks—the Economic Policy Institute, Demos, and the Century Foundation)—all forge a similar path, and all head in a direction different from Bowles and Simpson.

It’s the direction most unions want to take. AFL-CIO president Richard Trumka strongly endorsed Our Fiscal Security, and two labor union presidents—Larry Cohen of the Communications Workers and Mary Kay Henry of the Service Employees—served on the Citizens’ Commission.

All of these progressive proposals advance a plan for a recovery that aims, first, for economic growth and job creation through public investment, aid to state and local governments, and aid to the unemployed, financed by short-term, stimulative deficits. Then by 2015, or when unemployment drops sufficiently (say to 5.5 percent), the plans would reduce federal deficits (achieving primary balance, not counting interest, by 2018-2020) during the economic recovery by relying in varying fashions on

The alternative, pushed by Bowles and Simpson and much of the Washington elite, is austerity. Cut budget deficits now. Cut social programs (even Social Security, which has no effect on deficits). Cut tax rates for everyone (while ending tax expenditures, which are skewed to the rich but include many helping the middle class). Cut government down to a smaller size, rather than invest.

Cut, cut, cut. It is all too reminiscent of banker Andrew Mellon’s advice to President Hoover at the start of the Great Depression: ”Liquidate labor, liquidate stocks, liquidate the farmers, liquidate real estate . . . purge the rottenness out of the system.” Or, more precisely, the advice FDR mistakenly followed in 1937, after New Deal programs had helped stimulate job creation. Under pressure from conservatives, he began balancing the budget—only to lead to a new downturn.

These proposals demonstrate how it is possible to balance the budget with rising government investment, faster growth, more jobs, and creation of the basis for a new, more sustainable economy. Most working and middle class Americans retain the programs they need while most of the tax responsibility shifts to those most able to pay.  Austerity is not needed; it will only make life worse.

There’s one hitch: even though these progressive plans fit well with popular opinion, they have virtually no chance of passage in their entirety, especially when John Boehner takes the House gavel next year from Nancy Pelosi. But probably none of the austerity plans could win outright either. Yet the progressive plans could help frame the debate for the next two years and the following election, if it “can put some spine in some of our Democratic friends,” according to Demos fellow and Citizens’ Commission member Robert Kuttner.

That spine is needed first and foremost by the man who got off to a bad start in directing the deficit dialogue on Monday, when he ordered a federal worker wage freeze for two years—President Obama himself.