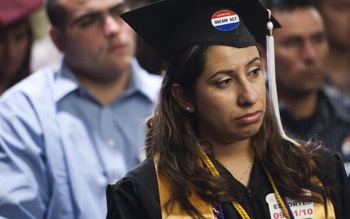 With the DREAM Act, some countdown or another always seems to be on, and especially in this year’s legislative season. That’s due largely to the tenacity of a youth-powered movement to get this bill passed this year. But the bill is actually, truly, in its final days this week as Congress prepares to take up the DREAM Act before the close of the lame duck session. Its prospects, however, do not look good; there do not yet appear to be votes to pass the bill.

Senate Majority Leader Harry Reid will file cloture on his recent compromise version of the bill, S. 3992, tonight, paving the way for a Wednesday vote. The House is set to take up a different version of the bill sometime on Wednesday, said congressional insiders. The exact date and version of the bill they’ll consider is unknown as of this reporting, but it’s widely expected the House would vote before the Senate.

The House has a few more procedural hoops it must clear. Folks are awaiting the Congressional Budget Office score on the House version, for instance, and that could delay a vote. Last week, the Congressional Budget Office estimated that the S. 3992 version of the DREAM Act would actually reduce the national deficit by $1.4 billion over the next decade.

This effort marks the DREAM Act’s last chance before Republicans take control of the House and move six new members into the Senate for the next Congress, and the current vote counts make the bill’s prospects uncertain at best. The bill would provide undocumented youth with a clean criminal record a pathway to citizenship if they commit two years to higher education or the military.

The bill has been endorsed by President Obama and Department of Homeland Security Secretary Janet Napolitano and the Department of Defense included the DREAM Act in its strategic plan for the upcoming year. But still, the climb to 60 votes in the Senate is steep. DREAM Act supporters have gotten promises of support from Utah Republican Sen. Bob Bennett and Indiana’s Sen. Richard Lugar, who’s cosponsored several versions of the bill.

The DREAM Act cannot afford to lose much Democratic support, but already at least one Democrat has chosen to turn away from the bill. “I’m not going to support any act that I don’t think adds to jobs, or military or to the economy. Consequently I won’t support any motion to proceed or any kind of cloture on the DREAM Act,” Sen. Ben Nelson told Politico in November. “In addition, I think that has to be part of an overall comprehensive solution to immigration once we have the border secured, not until then.” Arkansas Democrat Sen. Mark Pryor has said he plans to vote no as well.

DREAM Act advocates have kept their focus on Republicans who supported the bill in 2007, like Kansas Sen. Sam Brownback, Utah Sen. Orrin Hatch, Maine Sens. Olympia Snowe and Susan Collins. But however unfriendly the climate was toward immigrants in 2007, it’s downright hostile in 2010. Hatch has already said he will not vote for the DREAM Act, vowing to block any movement on it until an extension of George W. Bush’s tax cuts get passed.

DREAM Act advocates had been hopeful they might win over Massachusetts Sen. Scott Brown, but during a pre-election move by Reid to add the DREAM Act and a “Don’t Ask, Don’t Tell” repeal as amendments to the defense authorization bill back in September Brown called the DREAM Act “a form of amnesty.” That vote eventually failed 56-43.

The bill, which would only have benefited a fraction of the immigrant population, has since been narrowed further. Only immigrants who have been in the country for more than five years and came to the U.S. before the age of 16, but are today under the age of 30 will be allowed to qualify. People who apply must wait 10 years for permanent residency, and then another three to become naturalized. The barriers are strict, the standards for eligibility extremely narrow.

The DREAM Act needs 218 votes to pass in the House, and 60 votes to clear cloture in the Senate.

That doesn’t mean that activists are going to give up their advocacy now. Last week Lucy Martinez, a DREAM Act activist and second-year undergrad at the University of Texas at San Antonio, was three weeks into a hunger strike in Texas aimed at Sen. Kay Bailey Hutchison. They had no luck getting to Hutchison in Texas, so Martinez is in D.C. this week to try to force Hutchison out of the spot she finds herself, between her principles and politics. Hutchison is another former supporter of the DREAM Act who has hemmed and hawed, but recently said she will not vote for the DREAM Act. Martinez is one of seven activists who have vowed not to eat until Congress passes the DREAM Act. Today marks the 27th day of her strike.

“We want her to talk to Sen. Durbin,” Martinez said. “If she doesn’t want to talk to us at least talk to him, so they can see what needs to be done so the DREAM Act can pass.”

Martinez said she was feeling weak, and had just come back from a doctor’s visit after “really feeling it” this morning, but she says she’s hopeful.

“Whatever happens, we will keep fighting for the DREAM Act,” she said. “We’re going to keep going no matter what happens.”

By day she and other DREAMers are on the Hill lobbying senators, and by night they gather together to study. Martinez has a couple of history and women’s studies classes, and her final exams are next week.