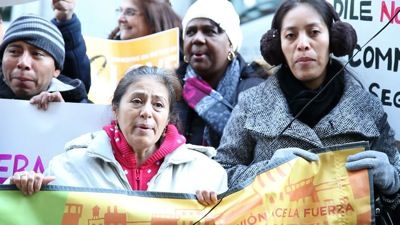 Is it possible to opt-out of the controversial Secure Communities program that shares local arrest data with immigration agents?

The public may know as soon as January whether the program is mandatory or voluntary.

On Dec. 9 lawyers for Immigration and Customs Enforcement (ICE) tried to argue before Judge Shira Scheindlin in the U.S. District Court for the Southern District of New York that they needed more time to respond to an emergency injunction to release opt-out related documents. But she was out of patience.

“I’m somewhat confused. The defense agreed to do this back in July and here we are in December,” said Judge Scheindlin. “I think the government is dragging its feet.”

Since ICE failed to meet its previous deadline, the judge set Jan. 17, 2011 as the new date for ICE to release the documents or explain why they must be withheld. Lawyers who made the request will have two weeks to comply, and then ICE will have one more week to answer.

“This is serious,” said Judge Schiendlin.

Almost everything known about Secure Communities has been released by ICE as a result of the ongoing records request made in February on behalf of the National Day Laborer Organizing Network (NDLON). The attorneys representing the group are from the Center for Constitutional Rights and the Immigration Justice Clinic of the Benjamin N. Cardozo School of Law.

The program has a mandate to target “criminal aliens” who are a threat to public safety. But documents released so far show most of those deported are charged with low-level offenses, some as minor as traffic infractions. About a quarter are innocent and just have a civil immigration violation. 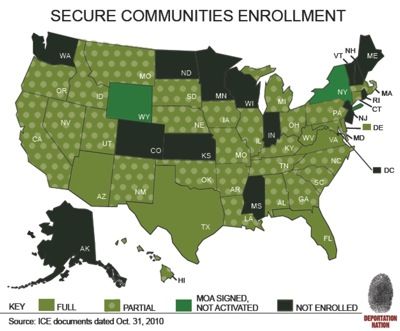 Fourteen states were enrolled in Secure Communities when the request was submitted. The total has since grown to include 35 states. ICE wants to expand the program nationwide by 2013 and has forced counties to participate against their will.

When NDLON organizer, Sarahi Uribe, took the stand during the Dec. 9 hearing she said counties and states wishing to resist the program would face irreparable harm if ICE did not release information about how to opt-out.

“We’re in the thick of it,” said Uribe. “We’re trying to figure out our next steps, but we don’t have the information we need.”

ICE released a small portion of the records requested on Aug. 2, 2010. ICE attorneys estimate they have responded to 30 percent of the requests.

“As far as I understand it, there has been little or no compliance,” said Judge Schiendlin.

ICE lawyers said they have identified about 15,000 opt-out related documents so far, and argued they needed time to sift through them to determine what could be released.

But the judge dismissed this request, saying she was familiar with records requests and knew this amount could be handled promptly.

“15,000 is a tiny set of documents,” said Judge Schiendlin. “It could be searched by the end of the week with the proper technology.”

She also refused to let the government set the stop date for its document search at the time when the original records request was made. She ordered that Oct. 13, 2010 be the cut-off date.

“I don’t think the government should be rewarded for its own delay,” said Judge Schiendlin.

She set a date of Feb. 25, 2011 as the deadline for ICE to release a second set of documents related to other topics in the re¬cords request, and noted several times that if ICE fails to produce documents in the two upcoming hearings they will face possible contempt sanctions.

This article was originally published on DeportationNation.org.