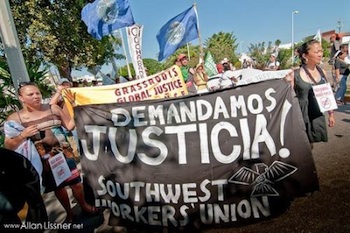 Despite the stern official statements delegates have aired at the Cancun climate conference this week, the real fight against planetary meltdown is proceeding at the pace of a drifting polar ice cap. Too slow for millions of workers struggling with global economic crisis and pinning their hopes on the future low-carbon economy.

So union representatives from around the world arrived in Cancun to ensure that no matter how ineffective the talks, labor wouldn’t be left out of the discussion.

There was initially some confusion among trade union delegates when a draft planning text seemed to omit critical references to the principles of “just transition” to a green-energy economy. But officials appear to be open to incorporating labor representatives in the dialogues of the Ad-hoc Working group on Long-Term Cooperative Action.

A workshop coordinated by a coalition of labor groups earlier this year raised concerns and lessons learned on green economics. According to the follow-up report, some labor-oriented ideas that have filtered into the Working Group’s dialogue include:

“Recognising the importance of avoiding and minimising negative impacts of response measures on social and economic sectors, promoting a just transition of the workforce, the creation of decent work and quality jobs, and contributing to building new capacities for both production and service-related jobs in all sectors, promoting economic growth and sustainable development.”

While all of these measures reflect important components of a labor-friendly transition to a low-carbon economy, it’s difficult to picture how it will ultimately play out amid the current economy (let alone the embryonic green economy). Whatever progress, if any, occurs at Cancun, the pending environmental crisis is sure to bring huge disruptions in workers’ day-to-day lives.

In the more immediate term, labor groups have focused on a proposed global fund to help finance climate-related mitigation and adaptation in poorer nations, demanding that:

The fund should facilitate innovation, research and development of green technologies, technology transfer to developing countries and promote the development of social protection schemes and public services.

The so-called just transition won’t come without pain, however. Labor suffers doubly from the environmental effects of climate change. Environmental volatility leads to conflict and economic instability, on the one hand. At the same time, a haphazard shift to a greener economy might also lead to deep job losses or the rise of green industries that are just as exploitative as the dirty ones they’ve replaced.

Part of the challenge is that climate change cannot be dealt with in isolation of parallel structural social problems. In report on the employment impacts of climate change, based on a recent conference in Belgium, Laura Elena Ruiz Meza, of Universidad de Ciencias y Artes de Chiapas in Mexico, argued that climate change would increase the region’s vulnerability to drought and flood, but adds,

Nonetheless, climate change alone is not to blame: neoliberal policies, such as the North American Free Trade Agreement (NAFTA) and the 90% fall in the government’s investment in agriculture from 1994 to 2000, have led to fewer employment opportunities in the Chiapas agriculture sector. Both causes have led to an impoverished population migrating to Mexico’s northern cities or the United States. In 2000, more than 300,000 Chiapas inhabitants left for the Northern states of Mexico.

In other words, the kind of “growth model” promoted by neoliberalism inextricably links climate change to social inequality, economic destabilization, and mass migration. Moreover, in communities that have exported migrants, those who stay behind are ill-equipped to deal with climate-related problems.

Local measures to mitigate or adapt, Ruiz added, have “suffered from a lack of participation,” particularly from women, and “focused solely on technical issues, ignoring their various social, political, cultural and economic impacts.”

One consensus that came out of the conference was that labor needs to be more inclusive and more holistic in developing its role in the politics of climate change. This might mean giving a greater voice to trade unions in the vulnerable Small Island States, for example, or lobbying to have International Labour Organization standards folded into the emergent climate-related regulations.

Even with supportive government policies and programs, labor’s position at the pivot of civil society, government, and the private sector, gives it a unique perspective on how to negotiate “socially inclusive development.”

What happens when the demand for solar panels in the U.S. only accelerates the offshoring of manufacturing jobs to China? What if civil society groups advocate for the employment of disadvantaged workers, such as the formerly incarcerated, while unions are driven to secure jobs for their members?

The green economy has generated tremendous hype, but it’s still impossible to gauge how many jobs will be created, whether they will offer decent pay and working conditions, and even whether the hot green sectors like biofuels or wind farms will be sustainable or detrimental in the long run.

Lofty visions loom over Cancun, but at this point, the labor-environment coalition is just starting to find a balance between bread-and-butter employment needs and monumental climate challenges. On the ground, neither movement can advance without a mutual buy-in on both sides.

In the face of a political establishment that touts “free markets” as the solution to climate change, the “just transition” won’t be a smooth one. But it may be the only brake that communities can wield against industry’s drive to exploit both people and the planet.