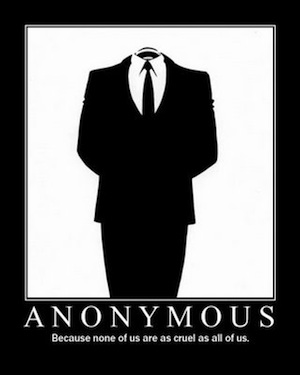 Today, as Wikileaks editor-in-chief Julian Assange has been taken into the custody of British police, the BBC has word that Anonymous, the informal online hacker community has launched an attack. Its targets arecompanies, like Paypal and a Swiss bank, that have participated in attempts to shut Wikileaks down by withdrawing services from Assange and his site.

A member of Anonymous who calls himself Coldblood told the BBC that “multiple things are being done”.

“Websites that are bowing down to government pressure have become targets,” he said.

“As an organisation we have always taken a strong stance on censorship and freedom of expression on the internet and come out against those who seek to destroy it by any means.”

“We feel that Wikileaks has become more than just about leaking of documents, it has become a war ground, the people vs. the government,” he said.

So far the denial-of-service attacks (DDoS), which swamp a site with so many requests that it becomes overwhelmed, have failed to take any sites offline although that is not the point of the attack, according to Coldblood.

DDoS attacks are illegal in many countries, including the UK.

Coldblood admitted that such attacks “may hurt people trying to get to these sites” but said it was “the only effective way to tell these companies that us, the people, are displeased”.

The environment of digital activism certainly raises new questions of where to draw lines between violence and nonviolence, between Satyagraha and a riot. A sample of Anonymous mottos suggests how hard it might be, in this case, to do so:

Anonymous is devoid of humanity, morality, pity, and mercy.

Anonymous works as one, because none of us are as cruel as all of us.

Anonymous has no weakness or flaw.

Anonymous exploits all weaknesses and flaws.

Anonymous are created as equals. 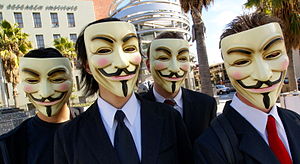 Importantly, Anonymous is not just an online phenomenon; the idea—the “meme“—has expressed itself in real-world demonstrations with people wearing Guy Fawkes masks. (The masks are a reference to the book and film V for Vendetta, a dystopian story whose hero is a violent revolutionary.) The masks are perhaps best known for appearing at protests against the Church of Scientology, which has been a consistent focus of Anonymous’ attention. In that case, as in many others, including the present defense of Assange, the group’s wrath has been brought on by anger against perceptions of censorship. For the same reason, they’ve also been supporters of Iran’s Green Movement. In 2007, a Fox News report in Los Angeles accused Anonymous of being “domestic terrorists.”

When Anonymous’ actions are compared to those of Assange himself, there seems to be some bit of sense to that accusation. Assange’s work, for all the terror it strikes in the hearts of certain diplomats, is freeing information, not bombarding anybody with it. However haphazardly and partially, Wikileaks allows truth to come to light. DDoS attacks, by contrast, are a protest against censorship that, by potentially shutting down certain corporate websites, looks eerily like censorship in its own right.

Both Assange and Anonymous appear to share a similar ideology, one with deep roots in hacker culture, according to which causing chaos can become a privileged means to vaguely-defined ends. A bit of chaos, it is true, can go a long way toward shaking those perpetuating an unjust status quo into their senses—or, at least, out of power. But it can also pave the way to new forms of domination. Everything depends, therefore, on the kind of actions and communities that bring it about. A revolution launched by a Bolshevik vanguard will lead to a Bolshevik-vanguard state. Chaos by means of openness, if it succeeds, will leave us with a more open society when the dust settles. Chaos by means of denial-of-service leaves us with victors convinced that silencing opponents is a useful way of getting what they want.