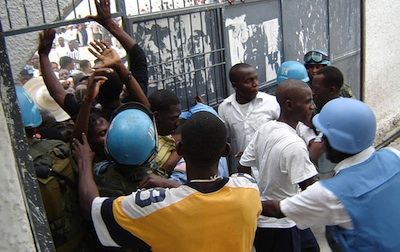 It’s not surprising that Haiti’s presidential elections seem to be a failure. Nearly four days after ballots were cast, there’s still been no declared victor. Twelve of the 15 presidential candidates are crying foul, along with most of the nation. And all that’s left now is to ask how exactly things have gotten so bad.

Isabel MacDonald writes at The Huffington Post about the ruling party’s hand-picked electoral council who, amid pressure from the U.S. and Canada, decided to go forward with the election despite a deadly outbreak of cholera. The Insititute for Justice & Democracy in Haiti reportedly warned that having UN (MINUSTAH) troops stationed at polling places was “more likely to trigger violence than prevent it.” And it looks like that’s exactly what’s happened.

And it’s those same UN Troops who have been blamed for the deadly outbreak of cholera that’s already claimed 1,300 lives in Haiti.

But according to MacDonald, the deadly cholera epidemic raises the larger question about the role of countries like U.S., Canada, and France who’ve been in the country for years and seemingly done little.

“With all this international “help,” why on earth doesn’t Haiti have the basic infrastructure that could have prevented the cholera outbreak?” MacDonald asks.

Over at The American Prospect’s blog, Sam Petulla and Colin Fleming argue that foreign interference ultimately does more harm than good:

What we’re seeing now — with 12 of the 19 presidential candidates calling the election a farce, and OAS declaring the elections valid despite in the same breath admitting that 56 polling stations “experienced failure” — is the sad but inevitable result of the international community failing to hold the country to the same standards of integrity as it holds the thousands of relief organizations operating inside of it. Indeed, when it comes to democracy in Haiti, “good enough” seems to be what’s expected. Haiti continues to be an NGO Republic — with thousands of independent nonprofit organizations operating inside that have little interaction with and do not support the government.

At least one of the presidential candidates who cried foul is now stepping back from the claim, and the drama appears to be headed to a second round run-off in mid-January.