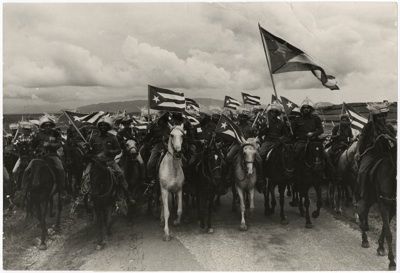 “Cuba in Revolution”
International Center of Photography
Through Jan. 9, 2011

You’ve seen it on T-shirts, buttons and even bobble-heads: the high-contrast, cropped image of Ernesto “Che” Guevara, radiating hardscrabble idealism and a higher purpose. This image is so ubiquitous that it has become something of a ready-made parody: it’s a symbol that seems to symbolize only itself. When the image does appear in earnest, though, it appears as the badge of a revolutionary mindset, but which revolution?

This photo, titled Heroic Guerrilla, is at the center of “Cuba in Revolution,” a photojournalism exhibition at the International Center of Photography that features more than 180 vintage works by 30 photographers. Heroic Guerrilla, taken by Alberto Korda, shows Che attending a memorial service in March 1960 for victims of the La Coubre explosion. Fifty years later, it’s one of the most reproduced photos in the world.

The exhibition stretches from the 1940s through the 1959 uprising, when Che, Fidel Castro and a cadre of armed intellectuals overthrew then-President Fulgencio Batista’s brutal dictatorship. The show ends in the less idealistic late sixties.

Cuba’s communism still generates heated debate — there are ar¬dent fans and bitter exiles. Looking at these photographs, though, one can imagine that in that mo¬mentous burst, in that sudden rewriting of history, it must have been tremendously exciting.

As filmmaker Jeffrey Skoller puts it in his book Shadows, Specters, Shards: “From the vantage point of the cynical 21st century, it is hard to understand just how romantic and full of meaning the victory of the Cuban Revolution was for young Latin Americans. After a century of brutal imperialist domination there was now the sense of possibility for progressive social change — not just in Latin America but throughout the developing world.”

Indeed, the revolution drew in photographers and filmmakers from around the globe; the exhibition in¬cludes not just the work of native Cu¬bans, but also great images by British, U.S. and French photographers. 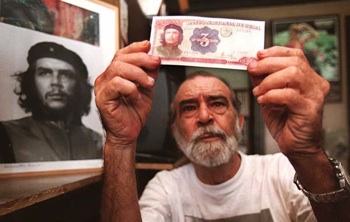 The astute photos of Constantino Arias, which document life in pre-revolutionary Cuba from the 1940s to 1950s, show drunken tourists and lavish oil industry fêtes in vast ballrooms — doomed dances of archaic, opulent splendor. Those photos are countered with harsher shots showing the realities of the period, including people struggling in slums (these images, unfortunately, feel a lot less archaic). The exhibit then moves into the thick of the revolution with photos by Tirso Martinez and Andrew Saint-George depicting scruffy guerrillas in jungle camps in the Sierra Maestra. Elsewhere, we find public celebrations, determined soldiers and even a charging cavalry — propaganda, naturally, but still gripping, as good propaganda often is. There are some harrowing photos but there seems to be a conspicuous lack of real violence in these images of a violent revolution. Discordant yet personal photos by José Figueroa (who began his career as Korda’s assistant) show young Cubans reveling in banned rock’n’roll, and the exhibit ends with the Cuban government’s crackdown on unauthorized photographs — twin reminders of how revolutions can sour.

But the main focus of the exhibition, of course, is Che and Castro: the show finds them speaking with foreign dignitaries, gazing out of hagiographic portraits, and even playing baseball, which looks a bit strange. The beautiful imagery here did not happen by chance. The Cuban revolutionaries understood the power of a good photograph and they deliberately spun their historical moment into an aesthetic — a fashion even (there are reasons why their outfits were so cool).

A haunting series by Brian Moser shows the crowds around Che’s corpse right after he was killed in Bolivia in 1967 — with his bearded, beatific face, it’s all unmistakably Christ-like. If Heroic Guerrilla has been reproduced into near-nothingness, perhaps that’s a natural consequence of turning men into symbols. Symbols, as we know, can be erased.