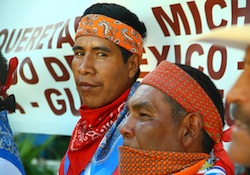 And today, heads of state started to arrive. They will discuss final draft texts on Thursday and Friday. About 20 to 25 heads of state are scheduled to arrive. Despite national emergencies in the homes countries, some nations – such as Colombia, which is currently hit by floods that have left 32 dead and 70,000 displaced – are managing to send their leaders. No G20 country, however, is sending a head of state.

Reports of adverse climate change continue to gather apace. Yesterday, the United Nations Environment Programme (UNEP) held a press conference, during which they presented the direct consequences of global warming on Latin America and the Caribbean, including melting glaciers,

Today, the UNEP released a report, delineating the affects of climate change on mountain glaciers. They would lead, one the one hand, to floods and, on the other hand, to droughts. The report delineated that rainfall would be at once more sporadic and intense. (Billl McKibben discusses this effect on the opening pages of Eaarth.) As the report reveals, these effects are already being felt now.

The Elephant in the Room

The U.S. continues to stall the talks, refusing to budge from the Copenhagen Accord and sign on to the Kyoto Protocol, which the overwhelming majority of the countries here support.

At the United States press conference yesterday afternoon, Democracy Now’s Amy Goodman asked U.S. Climate Envoy to respond to revelations of the wikileaks that the United States pressured other countries, such as the Maldives, to sign on to the Copenhagen Accords by exerting financial pressure. (The wikileaks documents reveal communications between U.S. lead climate negotiator Todd Stern, Deputy Envoy Jonathan Pershing and Connie Hedegaard, host of the UNFCCC in Copenhagen in 2009, in which they discuss how to pressure countries to sign on to the Copenhagen Accord.) http://www.guardian.co.uk/environment/2010/dec/03/wikileaks-us-manipulated-climate-accord

To Goodman’s request for a response, Stern replied sternly: “Thanks very much. On the wiklileaks per se, I have no comment. And that’s a U.S. government position and we don’t comment on leaks of classified information.” Stern then recalled an anecdote about the negotiator from Norway, who was accused of bribery, who stood up and blasted the person who suggested that by saying: ‘You can’t on the one hand ask for and make a strong case, legitimately strong case, for the need for climate assistance and on the other hand accuse us of bribery. You want to eliminate. We can eliminate any cause for accusation for bribery by eliminating any money. Eric was powerful in that statement. I agreed with him 110% then and I do now.”

Yesterday, Bolivia’s lead climate negotiator Pablo Solón in a press conference told attendees that he was deeply disappointed with the initial draft text that was circulated this past weekend.

It left out many things that Bolivia called for, coming out the People’s World Conference on Climate Change, convened in Bolivia in April by Evo Morales.

In an agreement that come out of this People’s World Conference, Bolivia agreed upon the following items, which have been put forward for inclusion in the draft negotiating UNFCCC text:

1. a declaration on the rights of nature
2. and an inclusion of mention of human rights
3. and the rights of indigenous peoples;
4. a definition of forests that does not allow for plantations or for genetically modified trees;
5. and a rejection of market mechanisms
6. and of the UN program to Reduce Emissions through Deforestation and Forest
Degradation or REDD
7. a mention of the impact of war on greenhouse gas emissions
8. and the creation of a climate justice tribunal.

According to Solón, Bolivian President Evo Morales will attend the talks, due to arrive tonight.

Meanwhile, China continues to switch its position. Last week, it stated it would not sign on to Kyoto.

China stated that it was willing to make commitments for emissions reductions, a position associated instead with the Copenhagen Accord.

China was quickly reined in by fellow BASIC countries (Brazil, South Africa, China and India. (These countries are not an official negotiating bloc within the UNFCCC process, however, they share certain economic positions and interests.)

In a joint press conference yesterday, BASIC stated that for it the following was non-negotiable:

1. there must be a second commitment period for the Kyoto Protocol.

2. there must be an accelerated flow of funds from developed nations to developing nations, especially to Africa and to small island states.

3. And there needs to be agreement on the process for monitoring, reporting and verifying the agreed upon emissions reductions.

In this press conference, India came out swinging against the United States. India’s chief climate negotiator starkly criticized the paltry U.S. reduction offer of a 17% emissions reduction by 2020 based on 2005, which work out to a paltry 3-4%.

India also criticized the measly $1.7 billion allocated by the U.S. in 2010 in fast track funding, which does no justice to the U.S. historical responsibility for bringing about climate change.

A question was raised at the press conference why, if the United States is holding up the process, an agreement is not simply reached without it.

It is a question that has been raised repeatedly in various press conferences, with India, with Brazil, with Bolivia.

Today’s discussions kicked off with Mexico’s press conference at which President Calderón announced that he had requested countries work bilaterally or in small groups, in order to prevent the talks stalling out in gridlock.

It remains to be seen what emerges from the negotiations in the days to come.

Tina Gerhardt is an independent journalist and academic, who has covered international climate change negotiations, most recently in Copenhagen and Bonn. Her work has appeared in Alternet, Grist, In These Times and The Nation.

This article was originally published on The Huffington Post on Dec. 7.