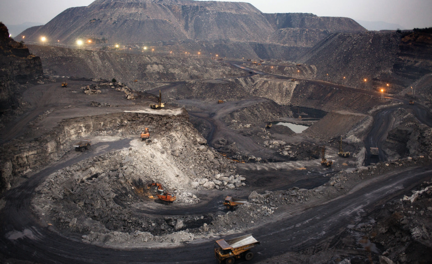 Despite India’s high profile in the recent Cancun climate talks and New Delhi’s declaration of its coal free future last year, the rising energy demands in Asia’s third largest economy have plunged the country into a coal rush–and a humanitarian crisis.

In the last month alone, with coal-fired plants powering an estimated 50% of the nation’s electricity, Coal India–the world’s largest coal producer–flirted with buying up floundering Massey Energy and Peabody Energy mines. Other Indian companies have moved into African and Australian markets.

Not that India’s own coalfields have been spared. India’s Minister for Environment and Forests continues to fend off demands by the coal industry for reduced forest protection restrictions. Earlier this year, human rights organizations charged that over 70,000 children were impressed into labor in some of the nation’s most dangerous “rathole” mines.

No one understands the impacts of coal mining on India better than Jharkhand activist Bulu Imam, Director of the Sanskriti Research Center in Hazaribagh, and coordinator of the Karanpura Campaign, a nearly 25-year-old campaign against open-cast strip coal mines. Imam also serves as the convener of India’s National Trust for Art and Cultural Heritage. An important exhibition on Jharkhand tribal art, along with photographs by Robert Wallis, will open in London at the Brunei Gallery in the School of Oriental and African Studies in April, 2011.

As the heartland of the coalfields in eastern India, Jharkhand has often been compared to Appalachia for its rich coal deposits–and the devastating repercussions and removal of local tribal or adivasi communities and their native lands by a form of open-cast mining similar to mountaintop removal mining. Photojournalist Robert Wallis made this overview of Jharkhand from his story, “Dark Side of the Boom” last year. Foreign Policy magazine did a photo essay this fall on the region’s coal wars and conflicts, which have now embroiled Maoist insurgents.

With his region dealing with 30 massive open-cast mines, I recently did an interview with Imam to learn more about the coal rush in India, with a particular focus on Jharkhand. For Imam, the displacement of tribal populations ranks as “a humanitarian disaster of the first order.”

JB: What type of mining is employed in your area?

BI: The type of mines is open-cast coal mining or what you call strip mining very similar to mountain top removal in the Appalachians. Very few local people are employed since the work has been since the beginning planned on a high technology method of mining and out of the 50,000 tribals displaced by Piperwar and the two Ashoka mines not even 300 have gained employment as labourers or been re-settled. The other expert labour for operating the big machines have been brought from outside areas. There are many voluntary organizations working in the area as removers of poverty and targeting the displaced people for education and acculturation. Alien ideologies are being imposed upon vulnerable forest subsistence societies which is in keeping with the government policy of urbanizing village societies. As a result these people are losing their traditional culture and ability to live on the land in a productive manner.

JB: Are you able to estimate how big of an area has been mined in the last decade?

BI: The actual area mined might seem small i.e. 15 sq.km but its impact in ravaging the land which is richly forested and heavily watered with streams cover ten times that area in the very least. If another 30 mines are made it will be multiplied by 15 in square kilometers. Most of this land is forested in a natural ecosystem and richly agricultural since the Karanpura Valley is well watered by over 37 streams and has been known since British documents that mention the Karanpura Coalfields (19th cent.) as the rice bowl of Hazaribagh.

JB: For an American readership, who are the adivasi communities, and what rights do they have in protecting their land?

BI: The Adivasis are the indigenous first dwellers whose ancestry is traced to a prehistoric level by rockart of the region which is world famous and by the palaeolithic remains of earlier generations that have made the valley famous throughout the world and drawn international attention to it. You may see the I COMOS World Report and threatened Site: www.international.icomos.org/risk/2001/indi2001.htm or www.international.icomos.org/risk/2002/india2002.htm.The valley is a rich repository of ancestral tribal art connected with the 14 painted rockart sites dated back to the Mesolithic and more recently Chalcolithic eras. Currently an important exhibition on the art, along with photographs by Robert Wallis, is being organized in London at the Brunei Gallery of the School of Oriental and African Studies for two months from April 2011. I will be in London with two tribal artists for two seminars at the Univ. of London being organized by SOAS to coincide with the opening of the exhibition on 13th April 2011.

We have already held about four dozen international exhibitions of the art highlighting the environmental and social displacement concerns which have drawn attention to the mining like nothing else, The village mural paintings are practiced bi-annually by tribal women by decoration of their homes during the harvest in Oct. and called Sohrai which is a painted art done with locally procured ochres and oxides from stones and another art form called Khovar which is made by cutting the earth colours which is called Khovar (same name as the painted shelters in the hill) which is practiced during the marriage season in the Spring months (Feb.-May).

The rockart caves are also called Khovar and represent the marriage room which is a tradition of the art even today. All this has gone to prove that the inhabitance of the valley are an indigenous people since the very earliest times and that they can claim their rights under the UN Declaration on the Rights of Indigenous Peoples (2007), and under ILO 169.

JB: What is the impact of the mining on local populations, especially for women and children?

BI: The mining impact on local populations, especially women and children is horrendous since the people are living in a state of fear and daily traumatic displacement and have no means of survival as their agricultural lands and forest resources are being destroyed in huge swathes daily which is a matter of great concern for all those in the world interested in protecting the rights of women and the girl child. You may draw your own conclusions from what I have written of what the state of tribal women and children in the valley must be. This is a humanitarian disaster of the first order.

JB: Can you give a general overview of the mining battle ground in the North Karanpura Valley–and across the Jharkhand Valley?

BI: The North Karanpura Valley lies in a deep rift valley over a Jurassic field in the upper part of the Basin of the Damodar river forming a rich coal strata 44 miles in length from east to wes and 22 miles in width from north to south in the Chatra and Hazaribagh districts of North jharkhand, between the ranchi plateau to the south and the hazaribagh plateau to the north. The Karanpura coal-fields were discovered by Mr. D.H. Williams in 1848 while doing the survey. They were originally mapped by T.W.H Hues in 1867 after Dr.Vincent Ball had discover the South Karanpura filed near Tungi south of the Damodar River where today there are vast opencast and underground coal mines (Bachra, Dakra, Rai, Hindigir, etc.).

The North Karanpura Opencast Coalfields project started in 1985 after a man named Allen Roy approached Prime Minister Rajeev Gandhi for Opencast coalmine Turnkey technology to be provided by Messrs. White Industries Ltd. of Sydney. The project was located at Piperwar North of the Damodar river in western North Karanpura Valley.I began my campaign against this mine in Australia against white industries and also challenged the Indian mining company Central Coalfields Ltd. The White Industries interest as a result ended in the mid 1990’s. The Piperwar mine (5sq.km in area, 300 feet depth) displaced 6 villages with approximately 5 villages and a coal washery nearby displaced 2 villages. A railway line which I also fought from the the near by railway station Mc.Gung was brought via a town named Khalari destroying approximately 100 village houses and a dozen sq.km of tribal forests which were not compensated. Railway line has not yet been completed due to village protest.

Shortly thereafter CCL made two more opencast mine of about 5 sq.km each displacing villagers in 8 villages and scattered hamlets and this mining is still continuing towards a heavily built-up tribal area in the forest (See newspaper report of today by Jaideep Degharia). The original plan was to mine the entire North Karanpura Valley (half of which is forest and half rich agricultural land with a population of 203 tribal villages. After the three mines that has been made (the last Ashoka II in progress of strip cutting, four more new mines have been planned by CCL and NTPC (National Thermal Power Corporation of India) being as follows, Pakri Barwadi, Keridari, Magadh, Chati-Bariatu.

The total number of mines planned for the valley is over 30 open cast coal mines. Also planned are two Mega Super Thermal Power Plants with new Dams built alongside. This has entailed the damming of the Barki river in the west near Tandwa and the Garhi river in the east near Badam (See map). Several new mines are planned in both areas apart from those mentioned for Pit-Head electricity generation. The 500 sq.km of forest land contains rich archaeological sites and rockart and is the only existing wildlife corridors for tigers and elephants between the Project Tiger Park and Elephant Sanctuar between Palamau to the east and Hazaribagh to the west.

This was subject of my protracted battle with the mining companies and eventually the mining companies were forced to accept mandatory Environmental clearance before entering wildlife corridors. The matter was taken up also when President Clinton came to India in 2000.

The full story is in my book Forests of the Buddha, co-authored with environmental Journalist Phil Carter available from Trafford Publishing. Further, there was a matter of a 480 million dollar World Bank loan for resettlement given to CCL which we had been fighting and after drawn to the American government. Attention was cancelled in June 2000. The story is in this book. At present about 500 sq.km of agricultural land is at a mercy of the mining companies and the villagers are living in a state of fear throughout the valley. This is an example of neo-liberal economics at its worst and I must say that the US links points towards the Washington Consensus.

JB: What government agencies have intervened on behalf of the adivasi communities?

BI: There has been no government agency fighting on behalf of the tribals, and the so called NGOs (Non Governmental Organizations) are registered charities working in self interest. A few Christian organizations have joined the fight against the mining in a noble manner to protect the tribal interests and prominent among these may be mentioned the work of Sr.Bina and Sr.Gemma of the Chotanagpur Adivasi Seva Samiti (CASS), and a Jesuit priest named Tony Herbert who started an organization called Prerana which opposed the mining and displacement and interacted widely with local organizations. I have worked in coordination of these two organizations against the Parej open-cast mine once funded by the World Bank for rehabilitation of displaced people which is approximately 100 kms east of the North Karanpura Coalfields Project.

For more information on coal mining in India or to support Iman’s work, visit www.karanpuracampaign.com.