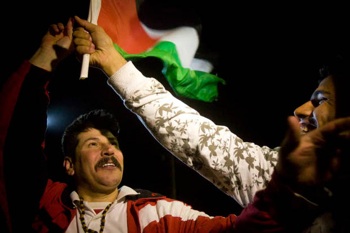 Before he had even reached the gate of Ofer military compound, Adeeb Abu Rahmah had his hands in the air in celebration. Abu Rahmah crossed the iron gate of the compound and walked into freedom after eighteen months in military prison. Despite the frigid mountain air, the warmth of Adeeb’s presence could be felt strongly by all present. He embraced his daughters immediately with tears in his eyes. With barely a moment to catch his breath, Adeeb kissed and hugged everyone that was present, occasionally throwing his hand high in the air with a peace sign and yelling out one of the many chants that are common on demonstration days in Bil’in.

As Adeeb Abu Rahmah greeted his loved ones on a windy night in the Ramallah hills, he led chants calling for national unity and for the release of his cousin, Abdallah Abu Rahmah.

Abdallah Abu Rahmah was taken from his home in the middle of the night on December 10, 2009 and has remained in prison since his arrest.  The initial charges against Abu Rahmah—stone throwing and arms possession—were dropped and he was later convicted of incitement and organizing demonstrations. Abu Rahmah’s conviction drew criticism from Amnesty International, B’tselem, Human Rights Watch, Desmond Tutu, Jimmy Carter, the Spanish Parliament, and the European Union.

The European Union’s spokesperson of High Representative of the Union for Foreign Affairs and Security Policy, Catherine Ashton, spoke out against the conviction of Abdallah Abu Rahmah:

The EU considers Abdallah Abu Rahma to be a Human Rights Defender committed to non violent protest against the route of the Israeli separation barrier through his West Bank village of Bil’in.

The EU considers the route of the barrier where it is built on Palestinian land to be illegal. The High Representative is deeply concerned that the possible imprisonment of Mr Abu Rahma is intended to prevent him and other Palestinians from exercising their legitimate right to protest against the existence of the separation barriers in a non violent manner.

What does that mean that they are monitoring closely? I mean, you monitor the weather in Beijing closely? What does this mean? Why is it beneath the United States to come out and say something about this person who is a practitioner of nonviolence?

Lee’s tone borderlines on indignation as Crowley feeds him another pre-packaged dismissal of an answer. This incident is significant because it is a mainstream media reporter growing discontented with the US State Department’s lack of concern for an imprisoned human rights defender. Crowley, as the mouthpiece for the State Department, repeatedly deflected the question because he couldn’t provide an answer.

Showing support of Abu Rahmah’s imprisonment would be baseless, as Abu Rahmah has been hailed as a Palestinian Gandhi, modeling the type of resistance that President Obama called for in his Cairo speech. And as the last bastion of blind support for Israel, it’s nearly unfathomable that the United States would condemn Israel’s imprisonment of any Palestinian prisoner, even one committed to nonviolence.

An AP reporter questioning the United States’ silence in the face of Israel’s increasing repression of peaceful Palestinian resistance is a sign of the growing international calls for recognition of Palestinian rights and an end to the occupation. Israel must recognize that the repression of peaceful protest and the imprisonment of practitioners of nonviolence will further isolate Israel in the international community and will provide fodder to a growing recognition of Israel’s disregard for human rights standards and international law.