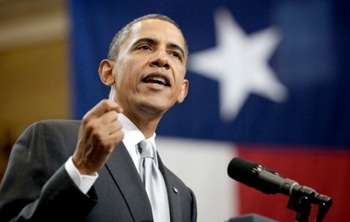 President Obama called the Senate’s failure to pass the DREAM Act today “incredibly disappointing.” The bill failed to clear a Senate filibuster by a five-vote margin, dashing immigrant youth’s hopes of finally winning passage of a bill that would have benefited hundreds of thousands of undocumented immigrants.

“As I said last week, when the House passed the DREAM Act, it is not only the right thing to do for talented young people who seek to serve a country they know as their own, it is the right thing for the United States of America,” Obama said in a statement.

“There was simply no reason not to pass this important legislation.”

“But my administration will not give up on the DREAM Act, or on the important business of fixing our broken immigration system,” said Obama, whose administration last year deported a record 392,000 people. Yesterday, senior officials from the Department of Homeland Security said that while they support the DREAM Act, they would not stop deporting DREAM Act-eligible youth in the event of its failure.

The DREAM Act would allow young undocumented immigrants to get on a long road to citizenship if they have a clean criminal record and dedicate two years to the military or higher education. There are an estimated two million undocumented youth in the country, and the Migration Policy Institute calculated that around 850,000 people would benefit from the DREAM Act. Every year, an estimated 65,000 undocumented youth graduate from high school.

“These young people are the next generation of doctors and lawyers, engineers and teachers, Congressmen and Senators—they must be part of the only nation they’ve ever called home,” said Illinois Sen. Dick Durbin in a written statement after today’s vote, adding that he would not abandon the DREAM Act.

“As long as they are determined to be part of this great nation, I am determined to fight for them to call America home,” Durbin said. “As long as I am Member of Congress, the DREAM will be kept alive.”

The bill has been in existence for nearly a decade, though the particulars of it have changed through the years and steadily narrowed who would be eligible for citizenship under it. The DREAM Act has come up for a vote in Congress multiple times, most recently in 2007, and failed to clear filibuster threats in the Senate every time. It passed the House earlier this month.

“The DREAM Act would have reduced our deficit by $2.2 billion over the next 10 years, and would have created a pool of qualified patriots willing to defend our country at a time when our service members are exhausted by multiple deployments,” said Senate Majority Leader Harry Reid. “But Republicans decided instead to play politics and waste the talent and commitment of these young men and women who want to give back to America.”

But Reid should have scolded members of his own party, too. Five Democrats—Sens. Max Baucus, Mark Pryor, Jon Tester, Ben Nelson and Kay Hagan—voted against the DREAM Act. West Virginia Sen. Joe Manchin, a Democrat, did not vote.

“Our youth immigrant movement is not over,” said Felipe Matos, an undocumented immigrant who walked 1,500 miles from Miami to Washington, D.C., earlier this year to rally support for the DREAM Act. “We will keep organizing to defend the human and civil rights of all people.”